From the late 1950s the artists made installations before they became a feature of contemporary art, and conceptual works before the term became a movement. Their sculptures transformed Pop Art, reassembling discarded consumer objects into surreal and discordant forms that were designed to shock and disgust the viewer. 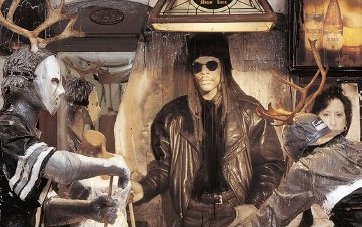 From the late 1950s Kienholz made installations before they became a feature of contemporary art, and conceptual works before the term became a movement. His sculptures transformed Pop Art, reassembling discarded consumer objects into surreal and discordant forms that were designed to shock and disgust the viewer, exposing them to the nightmare underbelly of the American dream.

Kienholz has had a huge influence on future generations of artists, and his work can be read in relation to the theatricality and grubby hand-made seediness of the YBA installation artists who featured in Saatchiâ€™s Sensation show. This is the first exhibition of work by Kienholz in London since 11 Kienholz Tableaux at the ICA in 1971, and the first showing in London of solo work by Nancy Reddin Kienholz. Kienholz presents four groups of works.

In his Concept Tableaux, made in the 1960s, Kienholz typed details of proposed works on a piece of paper, each accompanied by a brass plaque bearing the workâ€™s title, that would be realised if a buyer came up with the cash. These works are some of the earliest examples of what came to be known as Conceptual art, the movement that dominates contemporary art. The War Room presents a group of works made by Ed and Nancy during the 1980s and early 1990s that question the way we commemorate war, including Soldier X. The Kienholz Women is a group of assemblage sculptures from the 1970s and 1980s, that explore the formation of the American male psyche. The Bronze Pinball Machine with Woman Affixed Also, juxtaposes a working Playboy Pinball machine from the 1970s, with the cast bronze spread legs of a young woman. Finally, the exhibition includes a group of twenty watercolours from the 1990s, including $495, that present a notional fixed cash value for the work, creating an alternative currency that is more valuable than that printed by the US Government.

Kienholz was a farmerâ€™s boy of Swiss ancestry from Washington State, a self-taught artist, who made a living as an odd-job man in LA in the 1950s. Amongst many other jobs he decorated bars in Las Vegas and opened the Ferus gallery with Walter Hopps, a shortlived but influential LA gallery. Kienholz had his first solo exhibition in 1955 and in 1966 the LA County Museum held an important retrospective of the artistâ€™s work that caused widespread controversy and outrage, establishing his position as a leading artist of his generation. Kienholz moved to Berlin in 1972 when he married Nancy Reddin. They worked together until Edâ€™s death in 1994, shortly before their first joint retrospective, at the Whitney Museum of American Art in 1996. Nancy Reddin Kienholz lives and works in Hope, Idaho; Houston, Texas and Berlin, Germany. The artistsâ€™ work can be found in major collections in America and across continental Europe including the Centre Pompidou, Paris; the Museum of Modern Art, New York and the Stedelijk, Amsterdam.

Kienholz is accompanied by a fully illustrated exhibition catalogue with essays by art historians, Marco Livingstone and Craig Burnett. A retrospective of Kienholz work, including works from the Haunch of Venison exhibition, travels to the Museum of Contemporary Art, Sydney from the 16 December 2005 â€“ 5 March 2006. Tate Modern is screening two 1960s documentaries about Ed Kienholzâ€™s work, The Story of an Artist and Kienholz on Exhibit , introduced by Nancy Reddin Kienholz and Ed Allington on Friday 7 October.