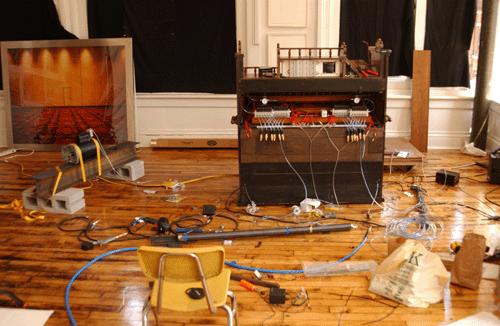 Playing the building is a sound installation in which the infrastructure, the physical plant of the building, is converted into a giant musical instrument. Devices are attached to the building structure â€” to the metal beams and pillars, the heating pipes, the water pipes â€” and are used to make these things produce sound. The activations will be of three types: wind, vibration, striking. The devices do not produce sound themselves, but they cause the building elements to vibrate, resonate and oscillate so that the building itself becomes a very large musical instrument.
David Byrne 2005

Playing Fargfabriken
David has created something whose scope I did not at first see. He has turned the architecture itself, the space and its construction, into a musical instrument. The sounds are produced without any amplifiers at all, via vibrations and resonances. Visitors really will be able to â€œplay the buildingâ€, with harmonies, bass and a rhythm section at their disposal.

This looks like more than mere coincidence. I can hardly think of a better way to celebrate our tenth anniversary.

Fargfabriken is no museum. We have no mission to fulfil, handed to us by the government or the local council. But Fargfabriken is no ordinary art gallery, either. We have no permanent collection or single sponsor who coughs up all the cash. Purely on our own survival instincts, we have had to define what we can contribute in the current social climate, locally in Stockholm as well as in a broader context. One side of this is what we call our laboratory of the contemporary. We discovered that the independent cultural platform was a particularly useful tool for sparking a discussion and engendering debate on a wide array of issues. We could shoulder a role which other players â€“ the media, businesses, politicians â€“ cannot, but which they urgently need.
The other side is precisely what Playing the Building illustrates: we collaborate with artists and allow them to develop completely new projects, usually of a character which, for one reason or another, would mak e them impossible in an ordinary museum or art gallery.
Last year, Doug and Mike Starn went from twenty years of representing light phenomena through photography to actually creating light. The year before that, we had Carsten Holler changing exhibitions every day in order to add yet another element of confusion to the exhibition phenomenon. And before that, Maurizio Cattelan produced a miniature Hitler for Fargfabriken and stood him on his own in the large, empty space.

Playing the Building is something more than a site-specific installation. Iâ€™m not quite sure what to call it, but what David Byrne is exhibiting is really Fargfabriken itself. Only reformulated into a musical instrument. Neither is it your average sound installation. Somewhere, Jorge Luis Borges is surely smiling at this opportunity to try a completely new instrument, like a new alphabet or language. Nobody knows what it may contain â€“ and what music will be made with it. But everyone is welcome to test its possibilities. All you have to do is sit yourself down and play the building.
Jan Aman, Director Fargfabriken