The artist has produced 6 new paintings and a group of 10 collages. The underworld of sexual deviance alluded to in the collages seems to find its outpouring in the viscous and charged paintings, resulting here in a complete and complementary body of new work. 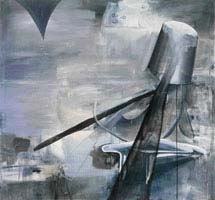 The Directors of Thomas Dane are pleased to present an exhibition of new paintings and collages by Albert Oehlen - the first solo show of works by this distinguished German artist ever to be held in the UK.

Regarded as heir to a generation including Baselitz, Richter and Polke, Oehlen has, since the late 1970s, pursued a relentless investigation of painting as a medium. A student of Polke, and a contemporary of Kippenberger, Immendorf and Bttner, he is an influential presence in German painting.

For his exhibition at Thomas Dane, the artist has produced six new paintings and a group of ten collages - works that form part of a long-running, painterly critique of the tenets of Modernism.

The recent paintings represent two modes of investigation. Oehlen began analysing the spectrum of grey in 1997, a process that has allowed him to combine the paradoxical notions of dissolution and formulation. Gezeichnete Hunde (Sketched Dogs) 2005 depicts a rearing beast striding out of a monochrome wasteland into detailed being.

Its coat is composed of delicate baroque floral motifs. In contrast, in Alte Frau in Kupfer (Old Woman in Copper) 2005, the relationship between figure and ground becomes literally blurred as the subject retreats behind a sweep of paint.

Abstraction and representation are conflated as forms advance and recede on the canvas, highlighting the artist's ambivalent relationship with the rhetoric of Modernism.

The artist's use of neon spray paint - a graffiti artist's tool of effacement - is introduced instead to charm the work, or bring it back from the edge.

In an interview regarding the use of colour in his work, Oehlen comments, "...the colours were naturally the main victim of the many actions taking place one on top of the other. Sometimes when they had collapsed into each other especially wretchedly, I consoled them gently with the spray can."

The ten new collages, juxtaposing art history and pop magazine culture, parody the tradition of collage and assemblage. References run riot, cut from art auction catalogues, magazines and newspapers, while busty models are pasted over snippets of bronze sculptures by Henri Laurens. History convulses under the pressure of redirected quotations.

Oehlen's collages and paintings speak to each other. The underworld of sexual deviance alluded to in the collages seems to find its outpouring in the viscous and charged paintings, resulting here in a complete and complementary body of new work.

Born in Krefeld, Germany in 1954, Albert Oehlen lives and works in Switzerland and Spain and is professor at the Kunstakademie Dsseldorf.

His international exhibitions include solo shows at the Secession, Vienna (2004), Muse Cantonnal de Lausanne (2004), Muse d'Art Contemporain de Strasbourg (2002), Kestner-Gesellschaft, Hanover (2001) and the Kunsthalle Basel (1997). A retrospective of his work is due to open in November at Miami MOCA.