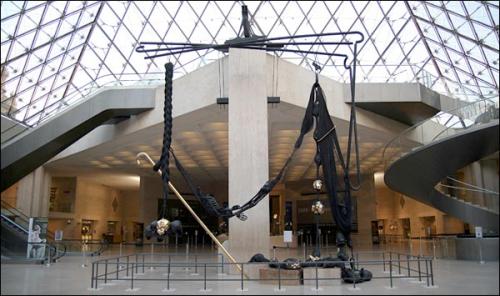 For the first time, the Louvre pyramid becomes an exhibition place displaying the monumental installation of a contemporary artist. Honouring its commitment to the work of living artists and on the occasion of the Year of Brazil in France, the Louvre has commissioned a piece by Brazilian artist Tunga, to serve as a strong and spectacular beacon radiating the creativity of contemporary Brazilian art, and to provide a counterpart to the exhibition Frans Post, Brazil at the court of Louis XIV. A Brazilian artistâ€™s contemporary vision of the Louvre as a universe of creations and of the relations between the Old and New Worlds thus parallels a 17th century Dutch artistâ€™s pictorial and documentary archive of Brazilian landscapes.

A major contemporary artist
Born in 1952, Tunga (Antonio JosÃ© de Barros Carvalho e Mello MourÃ£o) trained as an architect and is considered as one of Brazilâ€™s major contemporary artists. In France, his works have been presented at the Galerie Nationale du Jeu de Paume in 1992 and in 2001. Exploring the intersection of performance, poetry, installation and sculpture, he uses fiction and myth to compose pieces whose freedom and exuberance often call to mind the Baroque era. This piece is a sculpture hanging from a crossbeam affixed to the central column of the space under the pyramid. With its elements suspended in the manner of marionettes, the installation creates the illusion of maintaining its own equilibrium. The â€œsoftâ€ elements hang from the joining of the three main iron rods: hammocks, braids, masses of hair, in which â€œhardâ€ elements are trapped, such as skulls, or the heads of celebrated statues from the Museumâ€™s collections.

Alchemy of the Word and of human work
Light floods the work through the glass pyramid with black and gold reflections. This assembling of metals is very close to the alchemical processes Tunga often refers to. This alchemy is as much one of the verb, as the traditional one of human work on minerals. We can see here, as we did in past works (Lizart, 1989), an analogy between the metallic energies and those of the human body. Indeed Tungaâ€™s installations function according to a process of Â«mutual contagionÂ» associating different types of identities, fixed or fluid, to ensure the flow of energy. A temporal analogy is drawn between what is left of our world, symbolised by the presence of famous heads from the museum, and the skulls suspended over them, that could be their reflection transformed by the mirror of art.