The exhibition opens as part of the schools annual Artscape Festival. 'Visage' is based on the theme of the human form and includes works by artists such as David Godbold, Louis le Brocquy, Tim Mara and Michael Mulcahy. 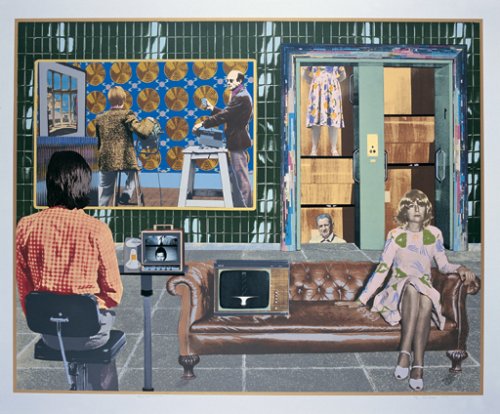 An exhibition of work from the Collection of the Irish Museum of Modern Art opens to the public at the Carrigaline Community College, Co Cork, on Monday 21 November as part of the schools annual Artscape Festival. Visage is based on the theme of the human form and includes works by artists such as David Godbold, Louis le Brocquy, Tim Mara and Michael Mulcahy.

The Artscape Festival is a multi-disciplinary event held within the school for the students and the wider community to celebrate the arts. The festival began as a result of an artist residency programme launched in the school in 1999 and has grown from strength to strength in the last five years. This is IMMA's second collaboration with Carrigaline Community College and has particular relevance in the year of Cork's Capital of Culture.

Madonna and Child with Onlookers, 1992, by English artist David Godbold takes as its starting point a much loved passage in the famous Renaissance fresco cycle by Masaccio in the Brancacci Chapel in Florence. The authority of the Renaissance icon is called into question by the substitution of subtly drawn onlookers in place of the solid bulk of Massaccio's originals. Under their gaze the child's head and face are transformed into a Picasso look-alike that is quite at odds with the rest of his body. Profiles and fuller faces, drawing and painting, perspectival form and Cubist elements are all combined here in a humourous challenge to the authority of history.

The Irish artist Louise le Brocquy is best known for his figurative paintings and portraits. Le Brocquy aims to capture something of the essence of his subjects and although he is not a traditional portrait painter, his images are usually recognisable. However, in Descartes, 1996, he has uncharacteristically left much of the canvas bare and has sketched an image in oil paint.

The subject of the work, the philosopher Decartes - who answered the philosophical question 'How do I know I exist' with the famous quote 'I think therefore I am' is unrecognisable. The emphasis and definition is around the skull or brain, the features are lightly suggested, an eye socket and nose are alluded to, suggesting that the physical being is unimportant compared with man's ability to think.

Power Cuts Imminent, 1975, by the Irish born printmaker Tim Mara can be read like a modern version of Velasquez's famous portrait Las Meninas of the Spanish Royal Family in his studio. In Mara's work the multiplicity of portraits or partial portraits of family members and colleagues is reminiscent of Velasquez while the claustrophobic build up of technical apparatus makes this utterly contemporary.

Tim Mara was the Professor of Printmaking and Head of School of Fine Art at the Royal College of Art, London. Seen by fellow printmakers as an outstanding technician, Mara himself saw technique only as a tool of expression, saying "in the hierarchy of fine art, printmaking is usually associated with craft skills - with technique. My work was always about the ideas more than the medium".

The self-taught English painter Nick Miller's portrait of fellow artist Patrick Hall has personal meaning for Miller in terms of their friendship. Patrick Hall, 1994, shows Miller's engagement with a 'present subject' as distinct from his memory based work. Painting and drawings of friends and family members, often from an unusually close range, are a trend in Miller's recent work. This parallels his practice of painting landscapes from a mobile studio, especially devised in order to minimise the separation between artist and subject.

The National Programme is designed to create access opportunities to the visual arts in a variety of situations and locations in Ireland. Using the Collection of the Irish Museum of Modern Art and exhibitions generated by the Museum, the programme facilitates the creation of exhibitions and other projects for display in a range of locations around the country.