Irrational thoughts should be followed carefully

In the first of his 35 famous 'Sentences on Cenceptual Art', Sol LeWitt in 1969 declared ''Conceptual artists are mystics rather than rationalists. They leap to conclusions that logic cannot reach''. Beyond the tradition which questions the artwork as a representation of the discrepancy between idea and executed work, the show curated by Philipp Ziegler, presents works by 6 young artists which deal with turning points in modernistic art. 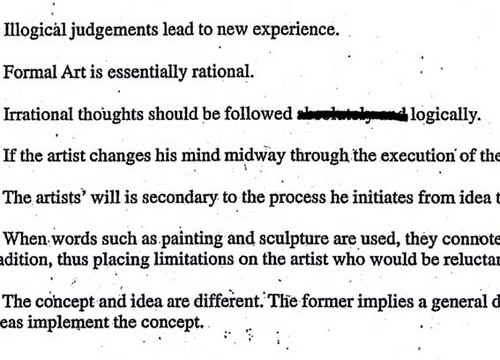 In the first of his 35 famous "Sentences on Cenceptual Art", the American
artist Sol LeWitt in 1969 declared "Conceptual artists are mystics rather
than rationalists. They leap to conclusions that logic cannot reach". Beyond
the tradition which questions the artwork as a finite, physically present
representation of the discrepancy between idea and executed work, the group
show at the Galerie Reinhard Hauff, curated by Philipp Ziegler presents
works by six young artists which each in their own way deal with turning
points in modernistic art.

The exhibition which is titled after the 5th sentence in LeWitt's "Sentences
on Conceptual Art" includes works by the Danish artists Lasse Schmidt Hansen
(*1978), Simon Dybbroe Moller (*1976) and Pernille Kapper Williams (*1973)
who studied together - or are still studying - at the Frankfurter St?l.
Also represented are Markus Amm (*1969) - originally from Stuttgart and now
living in London, - Kerstin Stoll (*1969) who lives in Hamburg and New
York artist Anthony Howard (*1976), who shows the film "Oui we". The
contradiction inherent in any attempt to carry out "irrational thoughts"
"logically" is the creative principle unifying the works in this show. They
have in common a fascination with conceptual gestures and an abstract form
vocabulary reminiscent of the dry precision of Constructivism, enhanced with
those mystical qualities of Minimal art of the 60's pointed out in Sol
LeWitt's writings. In the works exhibited by this group of artists Reality -
meaning references to everyday life, to design or to pop cultural
connections - is transferred into an abstract pictorial universe.

Whereas Markus Amm in collage-type paintings with direct references to the
compositions of Kandinsky and Malevich treats abstract art as superimposed
layers of meaning, Simon Dybbroe Moller in a series of three photographs is
commenting on the appropriation of the esthetical principles of
Constructivism through a documentation of a working area in his studio.
Pernille Kapper Williams' visually poetic text works experiment with various
typographies and forms of graphic presentation reminiscent of old art
catalogues, whereas Lasse Schmidt Hansen in his sculptures, installations
and works on paper concerns himself with the repetition of the serial
processes of Minimal sculpture. The large-format ink jet prints of Kerstin
Stoll oscillate somewhere between Northern Light and Rayonnism with an
incredibly dense surface structure which exudes a peculiar attraction. Those
visual clich? of the Modern Age which have petrified into pure formulas of
Pathos are what Anthony Howard uses in a satire on early performance
documentations. The 16mm film "Oui we" projected in the entrance area of the
gallery confirms the 3rd of Sol LeWitt's sentences: "Irrational Judgements
lead to new experience" !

Following the opening there will be a party at the Kunstlerhaus in Stuttgart
where the exhibition "Verdunklung/Darkening, curated by Starship and
including Ergul Cengiz will take place. For more information and photos
please contact the gallery and see the web site