Now everyone can be a dealer. A new project from Maurizio Cattelan, Ali Subotnick and Massimiliano Gioni: an edition of 1:6 scale reproductions of New York's smallest exhibition space, The Wrong Gallery. Open the door, turn on the light, install a work and become the curator you've always imagined you could be by organizing your own personal gallery program. 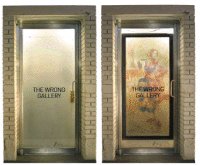 Now everyone can be a dealer

Cerealart is pleased to introduce a new project from Maurizio Cattelan, Ali Subotnick and Massimiliano Gioni: an edition of 1:6 scale (18 in. H x 11 in. W x 2 in. D; 45 h x 28 W x 6 D cm) reproductions of New York's smallest exhibition space, The Wrong Gallery. Open the door, turn on the light, install a work and become the curator you've always imagined you could be by organizing your own personal gallery program.

The Cerealart Wrong Gallery will be debuted at the Rubell Family Collection in Miami on December 1, 2005 during Art Basel Miami Beach. Richard Prince will be installing an original 1:6 scale installation for the occasion.

The Wrong Gallery was the smallest exhibition space in New York, located at 516A1/2 West 20th Street in Chelsea, opening in 2002 and closing in September 2005. The Wrong Gallery will reopen at The Tate Modern in December. The non-profit venue has 1 square meter of exhibition space. The tiny gallery's exhibition program and artistic experimentations are conceptualized and directed by Maurizio Cattelan, Ali Subotnick and Massimiliano Gioni, and so far they have organized over 30 exhibitions featuring works by Lawrence Weiner, Elizabeth Peyton, Paul McCarthy and many more. As the wrong dealers say, 'The Wrong Gallery is the back door to contemporary art, and i's always locked'.

The concept of the original Wrong Gallery, to replicate the structure of the art system while radically transforming scale and resources, is now taken to the next level by recreating a realistic 1:6 scale home version in resin, glass, aluminum, steel, brass, wood, with electric lighting. Cerealart will introduce reproductions of the original exhibitions in 1:6 scale to insert into the gallery as they are produced. The first installations are works by Elizabeth Peyton, Lawrence Weiner, Shirana Shahbazi, Tommy White, Keegan McHargue, Andreas Slominski, and Adam McEwen, The next releases will include installations by Paola Pivi, Aleksandra Mir, Phil Collins, Sam Durant, Gedi Sibony, Dave Muller, Roberto Cuoghi and Harrell Fletcher.

Maurizio Cattelan is one of the best-known Italian artists to have emerged internationally in the 1990s. In the spirit of Piero Manzoni, Cattelan produces witty, unorthodox sculptures, actions, gestures, and photo works that are as varied as they are unnerving. He creates works that mock the art system and even the artist himself. His art has been featured in four Venice Biennales (1993,1997, 1999, 2001), Skulpture Projekte in Munster (1997), the Tate Gallery, London (1999), and the Centre George Pompidou, Paris (2000; 2005) and is found in numerous permanent collections including the Museum of Modern Art, New York, Museum of Contemporary Art, Chicago, Los Angeles County Museum of Art, Solomon R. Guggenheim Museum, New York. Massimiliano Gioni directs the Trussardi Foundation in Milan and recently co-curated Manifesta 5 in San Sebastia'n (2004) and 'Monument to Now' (2004) in Athens; Ali Subotnick is an independent writer, editor and curator living in Berlin, Los Angeles and New York. Cattelan, Gioni and Subotnick have previously collaborated on a number of endeavors. Together they edit the visual arts publication series Charley, and contribute a monthly column, 'El Topo,' to Domus magazine. The trio are also curators of the 4th Berlin Biennial (March 2006). At the same time, they each pursue individual projects and activities. Lisa Ivorian Gray coordinates and the Wrong Gallery in New York and Flavio del Monte manages all of the publication and editorial projects for the team.

Cerealart is a company organized to design, develop, manufacture and distribute a range of esthetically pleasing, fun, and affordable artist's editions. Blurring the boundaries between high and low culture, the multiples are designed by critically acclaimed, internationally recognized, museum-exhibiting contemporary artists who are fascinated by consumer culture.