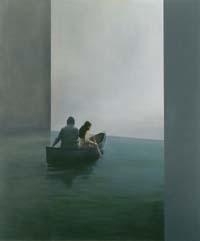 The exhibition is curated by Robin Clark, associate curator of contemporary art.

Tim Eitel’s canvases combine two dominant strains in contemporary painting—geometric abstraction and photographically influenced realism. In the dialogue between these two idioms, Eitel creates works that possess a preternatural stillness. His pictures are also rife with references to the histories of photography, film, and modern painting, lending multiple points of entry into the work. In the four years since Eitel completed his studies at the Hochschule für Grafik und Buchkunst in Leipzig, he has become known for large (and sometimes tiny), crisply painted work featuring young, hip protagonists framed by modernist architectural interiors. For example, several works from 2001 and 2002 take the Museum of Modern Art in Frankfurt (MMK) as a backdrop and portray visitors encountering spaces within Viennese architect Hans Hollein’s acutely angled building. Cool—both in terms of palette and sensibility—the works often depict figures in profile or seen from behind. Even when pairs or clusters of people are shown, each individual appears utterly self-contained. Their sole activity seems to be the act of looking, whether out of windows, at paintings, or, occasionally, through lenses to shoot photographs.

Representations of work by other artists (ranging from Piet Mondrian to Takashi Murakami) inflect some of Eitel’s MMK paintings and others set in exhibition spaces with a Pop sensibility. However, the works in the present exhibition, particularly the four large canvases—Lying Figure, Trailer, Helicopter, and Flag—demonstrate a marked shift in tone. The degree of isolation represented in these works has moved beyond garden-variety alienation to a dispassionate exploration of existential themes.

Tim Eitel condenses a range of sources—including the work of Edouard Manet, Thomas Demand, and Jeff Wall along with snapshots he takes himself—to create archetypal images. Each of the large paintings in the exhibition feature a central, iconic figure or object inhabiting a dark, murky zone evocative of fog or a formless void. Subdued in palette, expansive in scale, the monumental paintings in this exhibition are profoundly austere; they convey a sense of emotional twilight, of anticipation, of tenuous suspension within the eye of a storm.

Currents 96: Tim Eitel is part of a series of exhibitions featuring the work of contemporary artists at the Saint Louis Art Museum.

The fourth installation in the Museum's New Media series features recent work by Philippe Parreno. In an artist colony set among the rice paddies of Chiang Mai, Thailand, Parreno and the French architect Francois Roche built a surreal pavilion, which became the setting for The Boy From Mars, 2003. "Like conjoined twins," said Parreno, "the film and the building cannot be separated."

The film opens as the sun rises over on an enigmatic, tent-like building in rural Thailand. A series of glowing forms rising from the structure (itself illuminated from within by dim orange light) may be interpreted as 1950s-style flying saucers. The technological sophistication of the space travel implied by the film's title is undercut by the low-tech metal tubes and sheets of plastic used to construct the building itself. The source of power for the pavilion seems to be provided by a single water buffalo. The film is slow-moving and melancholic. The Boy From Mars may remind viewers of eerie scenes from films such as Andrei Tarkovsky's Solaris or Francois Truffaut's Fahrenheit 451. It is largely silent until the end when the sun sets and singer Devendra Banhart intones, "darkness dies and dawn will come, the day is short, the night is long."

Philippe Parreno's The Boy From Mars opens in Gallery 301 on December 1, 2005. The New Media series is curated by Robin Clark.