Group Show. The third and final exhibition in this year's is definitely the most difficult from this engaging project. With extremely diverse works from artists touching on themes such as fate on the periphery, outside our society, or even outside of what one would call normality. Artists: Norbert Becwar, Martin Bruch, , Carla Degenhardt, Barbara Unger-Wiplinger, Hermann Paul Huber, Erfan Khalifa, Alex Mc Quilkin, Tommy Schneider, Eva Thebert, Ulrike Myrzik, Manfred Jarisch. 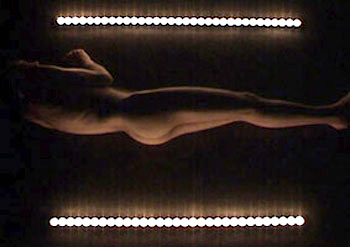 The third and final exhibition in this year's focus titled Realities is definitely the most difficult from this engaging project. With extremely diverse works from artists touching on themes such as fate on the periphery, outside our society, or even outside of what one would call normality.

NORBERT BECWAR giorni 2005: MUHE / giorni di Gloria 4 / Genick und Kopfschusse und sturze in ein Massengrab (neck and head gunshot wounds and fall into a mass grave) / Lukas Stefan Christoph Lukas Franz / in diesem September nachts 2005 (in this September night 2005), is a title of one of his works. Becwar takes images sent via the media about violence and abuse of power. He then, with a group of friends, recreates these images in his apartment. Sounds simple and at first glance appear to be almost humorous. However they leave a very oppressive and penetrating feeling like so many of the images, which so often flutter into to our homes.

MARTIN BRUCH has been afflicted with Multiple Scleroses for the past few years. He documents in his photographic series Bruchlandungen (Crash Landing), 1996-2001 his condition of being handicapped and his often times difficulties with movement through public spaces with his wheelchair or hand bike. Due to loss of balance or uneven surfaces such as sewer covers, curbs, stairs, etc it causes him to fall over. His photographs are immediate and penetrating documents of these falls. Sickness and physical handicaps and their consequences are still excluded from the normal day-to-day life and are taken too seldom into consideration.

In his work titled Cairo Zabbalin, 2004-2005 HERMANN P. HUBER investigates the socio-economic phenomenon in Cairo. The Zabbalin are immigrant farm workers who have come to Cairo. They belong to the Coptic Minority in a Muslim dominated Cairo where the only work available is as garbage men. For generations the have lived from the recycling of the garbage from a city of 22 million, that they collect trade sell and reuse. Cairo now has the world's largest percentage of recycling, roughly 80%, mainly due to the work of the Zabbalin.

ERFAN KHALIFA, is a son of Palestinian refugees who grew up in Libya and Syria, who tells in his video Der kleine Fluchtling (The Little Refugee), 2003 the true story of the events from his childhood. His work is a sensitive and emotional appeal to remember the plight of more than 4 million Palestinian refugees and his country. They are a nation who has no hope of ever being allowed to return to the land of their ancestors and cut-off from their homeland, original customs - a people without identity / life.

ULRIKE MYRZIK & MANFRED JARISCH classify themselves as photographers in which architecture serves as a mirror of our societies condition. In 2002 they traveled to Bankok, Tokyo, Osaka and Hong Kong for 3 months in order to document places and living conditions of homeless people with the support of Charity organizations. In Tokyo und Osaka they came upon hundreds of shacks in the no mans land of the big city, which they captured in their work Blue Boxes, 2003. The shacks may vary in size shape and material but they all have one thing in common, a covering of blue plastic tarps to protect them from the stormy weather.

ALEX McQUILKIN explains the period of puberty in her video Teenage Daydream - It's only Rock and Roll, 2002. One fluctuates between remaining a child and acting as an adult, fighting fears, desires, independence and rebellion like a permanent state of exception on the way to self-discovery. McQuilkin visualizes this condition in a loud and obnoxious solo performance.

TOMMY SCHNEIDER's video stadt nach dem krieg. Sarajevo, (city after the war. Sarajevo), 1999 tells the tale of how people survive in the city after the war. The memories and horrors of the war are still as present as the helplessness of the current circumstances.
The tales of the portrayed persons in relation to the improvisation and the ability to manage their difficult economic situations as well as the ideas, utopias and wishes for their future, are giving hope to change and normalization of the situation.

EVA THEBERT, battles speechlessness with pictures. In her video-trilogy Im Schatten deines Hauses (In the Shadow of your House), 2003 and in the installation Spurenmemory 2002 traces her search for her childhood. An African idiom says "If you have an enemy search for him in the shadows of your cabin." The truth in this sentence is confirmed when Eva Thebert tells of earlier sexual abuse in the family with a coded yet understandable visual language.

BARBARA UNGER-WIPLINGER & CARLA DEGENHARDT Heimat ist dort, wo mein Bett steht-? (Home is where my Bed is), 2004 is the title of their video film, a tragic comedy Docu-Dada. Filmed in 5 Retirement homes, 8 people between 70 und 94, born in Mahren, Bohmen, Siebenburgen and in Banat, are all Germans who had been banished. The film shows some unexacting and muddled attempts of these elderly people, to again remember life's stories, who are now reaching the end of their lives. The beds and homes in which they now reside become their maximal periphery - their last Homeland.