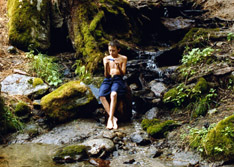 Sala Rekalde is proud to present Pine Flat (16 mm, 139 minutes), the first solo exhibition in Spain of American artist Sharon Lockhart. Lockhart is widely known for her films and photographic series whose spare images and structural strategies explore the tension between document and desire.

Pine Flat consists of Lockhart’s fifth film and related photographic series. The work was made over the course of three years in a small rural community in California. During this period, Lockhart closely observed the community’s children, constructing a portrait studio -to which they had an open invitation-, while immersing herself in their environment and noting the complexity of their interactions. Her highly descriptive, yet almost painterly images elude any attempt at narration, the emphasis being on the pleasure of the gaze and the notion of temporality.

The four-part installation Pine Flat at Sala Rekalde was designed by Lockhart in collaboration with her frequent collaborators, the Los Angeles architectural firm Escher GuneWardena. In it, the open floor plan of the museum is interspersed with five galleries, three devoted to photographic installations and two to a large cinematographic diptych shown in opposing screening rooms. The three rooms featuring the photographic works include: Pine Flat Portrait Studio, a suite of twenty portraits of the children; a suite of landscape photographs showing the natural surroundings of the community; and, in the third gallery, a single portrait and an accompanying sound element in the form of a vinyl record playing on a turntable. Finally, in an effort to confront the fractured and contingent nature of a gallery presentation, the film itself is broken up into its composite parts with each of the two screening rooms showing only one segment a day on a continuous loop. In one room, the first part of the film, consisting of six ten-minute film portraits of individual children, is shown, while a second room screens the six ten-minute group portraits.

During the run of the exhibition at Sala Rekalde, the film will also be screened in its entirety on 17 January and 7 February 2006 in the Auditorium of the Bilbao Fine Arts Museum. When presented in a cinema, the 139-minute film’s two parts are separated by a ten-minute intermission that features a musical recording by one of the children.

The exhibition will be accompanied by a catalogue published in Basque, Spanish, and English, designed by Conny Purtill and, offering a unique look into Lockhart’s working method, extensively illustrated with production snapshots of the making of the work. The publication will also include essays by Chus Martínez, the exhibition curator; Catherine Wood, curator at Tate Modern; Mark Godfrey, lecturer at the Slade School of Fine Art in London; Ignacio Vidal-Folch, a writer from Barcelona; and an interview with Ines Katzenstein, curator at the MALBA in Buenos Aires.

Once the exhibition has closed at Sala Rekalde in Bilbao, Pine Flat will travel in October 2006 to the Museu do Chiado in Lisbon, Portugal.

Coinciding with Sharon Lockhart’s solo show, Sala Rekalde is hosting Casino Lights in its Abstract Cabinet space. With its title taken from a song by Richmond Fontaine, Casino Lights is a sound event that mixes elements from the exhibition, the talk and the radio programme.

This project, curated by Marti' Manen in collaboration with Chus Marti'nez and David Armengol, offers a new take and almost cliche'd ideas of the continent of America, in particular the USA. With music as the sole thread running through the exhibition, Casino Lights takes a trip through time accompanied by the sounds of a fictitious America, represented here by three of the great received ideas of the American imaginary: the city of New York, the roads of the America of road-movies and the artificial paradise of Las Vegas, an oasis in the desert.

Casino Lights does not, therefore, present a realistic portrait of a country in a politically, culturally and socially complex situation. This reflection on the ways in which sound is presented that is the show enables us to travel back through sound to that image created out of hope and the fiction of films, thereby providing the opportunity to experience an emotional connection that goes beyond the conceptual connection with the known codes of visual language.

This sound journey through time with Casino Lights takes in four decades of the musical history of the States by bringing together some 20 songs by American singers and bands from the 1960s to the present day.