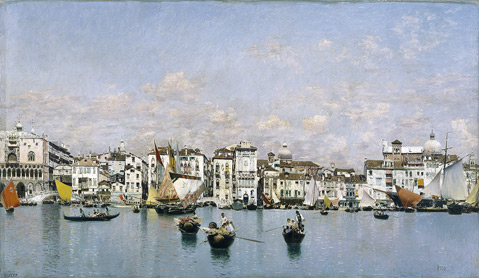 This exhibition focuses on the collection donated by Ramo'n de Errazu, a wealthy art collector, to the Museo del Prado in 1904. Its intention is to commemorate the 100th anniversary of this bequest, which entered the Museum’s collection in 1905. It comprises 25 works whose donation signified the addition of an exceptionally important group of paintings to the Museum’s 19th-century collection. The Errazu Bequest consists of 20 oil paintings and 5 watercolours executed between 1862 and 1895 by the most important Spanish artists of the day, all of whom were friends and contemporaries of the collector, namely Mariano Fortuny (1838-1874), Marti'n Rico (1833-1908) and Raimundo de Madrazo (1841-1920). In addition, it includes two works by the French artists Jean Louis Meissonier (1815-1891) and Paul Baudry (1828-1886), both leading names within French art of the Second Empire.

The core of the bequest is the group of ten works by Mariano Fortuny. It includes major compositions such as Nude on the Beach at Portici, a masterpiece and synthesis of the artist’s late style, as well as Elderly Nude in the Sun, a work that looks back to the tradition of 17th-century Spanish painting. At the time it was assembled, this was considered to be the finest group of works by Fortuny in existence. Ramo'n de Errazu also collected works by two other Spanish artists who were both friends and artistic associates of Fortuny: Marti'n Rico, of whom he possessed four works, and Raimundo de Madrazo (Fortuny’s brother-in-law), of whom he bequeathed nine works to the Prado.

In 1879 Madrazo painted a Portrait of Ramo'n de Errazu, imbuing the sitter with an elegant carriage that looks back to the tradition of Vela'zquez in order to achieve its modern, individual handling. The bequest is completed by two further works: The Pearl and the Wave by Paul Baudry, one of the most celebrated nudes painted in Paris at the time, and a portrait by the leading French artist Jean-Louis-Ernest Meissonier.

2005 marks 100 years from the date of the arrival of Ramo'n de Errazu’s bequest at the Museo del Prado. Errazu (San Luis de Potosi', Mexico, 1840 - Paris, 1904) was a wealthy landowner who settled in Paris in the last third of the 19th century and assembled a collection of paintings representative of bourgeois artistic taste of the day. The paintings were first shown at the Museo del Prado in 1905, hung in the same frames (some of ebony and bronze) in which they are seen today and commissioned in Paris by Errazu himself. The present exhibition aims to commemorate Errazu and his bequest by introducing the public to a collection of paintings in the preciocista style depicting landscapes and genre subjects and which fully conformed to the aesthetic criteria of contemporary bourgeois.

Mariano Fortuny was one of the leading artists of his day, contributing to the revival and transformation of painting in Spain. His innovate manner of depicting light, particularly in his very late works, and his outstanding skill and mastery in the handling of paint made him the instigator and leader of a style which inspired both Rico and Madrazo. Their approach to plein air painting was characterised by a graceful and attractive palette. Also worthy of note are the five watercolours in this bequest, in which Rico and Fortuny captured the natural world with a great sense of immediacy.

Museo Nacional del Prado
Paseo del Prado s/n. 28014 Madrid
OPENING TIMES
From 9am to 8pm:Tuesdays to Sundays and public holidays* (closed on public holidays that fall on Mondays)
*From 9am to 2pm:
24 December
31 December
6 January
Closed:
Every Monday of the year (including Mondays that are public holidays)
1 January
1 May
25 December
Easter Friday