The Viewer. The work is the second film by the artist and was presented for Sweden at the Nordic Pavilion, Venice Biennial 2005. Her work has over the years largely been associated with photography, examplified in her series of works Estate of a Deceased Person, 1992-1996, Set Constructions, 1995-2002, and Museums, Collections and Reconstructions, 1999-2004, which all deal with the representation of reality and the reading and interpretation of images. 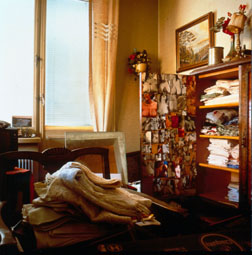 We are pleased to present a new exhibition by Miriam Backstrom.
The film The Viewer was produced for the Gothenburg Biennial in Sweden in September 2005, and is now shown in Denmark for the first time. The work is the second film by the artist and her first major work to be presented since she represented Sweden at the Nordic Pavilion, Venice Biennial 2005.

Miriam Backstrom’s work has over the years largely been associated with photography, examplified in her series of works Estate of a Deceased Person, 1992-1996, Set Constructions, 1995-2002, and Museums, Collections and Reconstructions, 1999-2004, which all deal with the representation of reality and the reading and interpretation of images. Backstrom’s photographs question the veracity of photography by exposing a staged reality and creating doubt on the immediacy of the image. The series mentioned are all characterized by the absence of people, yet they often discuss different approaches to portraiture. This field of interest Backstrom has continued to investigate in her more recent work that has marked a change of both medium and content, including text and book-, sound- and film works.

In 2004, Miriam Backstrom presented her first film Rebecka (DVCam 42 min.) at her solo exhibition with the same title at Museum fur Gegenwartskunst in Basel, Switzerland. The film is based on an interview between the Swedish actress Rebecka Hemse and the artist where subtle visual signs and dialogue expose to the spectator that it is no ordinary interview, but rather a matter of role playing and thus a blend of fact and fiction. The film was accompanied by the book and sound work Anonymous Interviews, and the notion of the anonymous is further investigated in the exhibition and book The Last Image at the Moderna Museet in Stockholm, Sweden and as well in the book All Images of an Anonymous Person, published on occasion of the Venice Biennial 2005.

The new film The Viewer (HDV 68 min.) once again features Rebecka Hemse, but this time together with a second actor, Tomas Ponte'n. As where in Rebecka the actress obviously is presented with the script for the first time when the director turns on the camera, the script in The Viewer is improvised and a result of discussions between the actors and Backstrom during the process of filming. Thus, the dialogue evolves just as much based on the directors notes for the characters as on the personal reflections of the actors. The film moves in the grey zone between the staged and what we would call reality, and as such dissolve the border of when we act and when we are ourselves. The two actors find themselves in a complex drama in a sort of therapeutic milieu. Reflections and discussions on the topics of role playing and the self are heard as individual monologes, and the use of simultaneous voice over add new layers to the staging and construction of reality, as well as producing different levels of the characters’ / actors’ identities.