''Like transient day'' features L.A. based Bronson's newest works including LED installations and multi-channel videos which derive from her ongoing interest in mediated experiences of nature, whether real or through text and representation. Her moving image works explore subjectivity, topography and meteorological conditions. 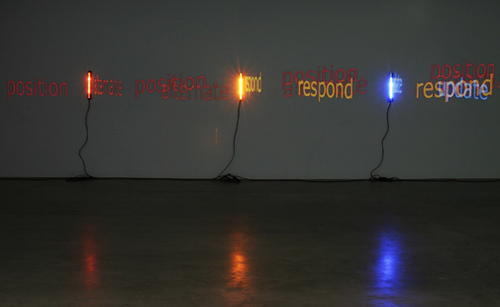 Lombard-Freid Projects is delighted to present Jessica Bronson’s first solo exhibition at the gallery. like transient day features L.A. based Bronson's newest works including LED installations and multi-channel videos which derive from her ongoing interest in mediated experiences of nature, whether real or through text and representation.

A pioneer of new media, Bronson’s moving image works explore subjectivity, topography and meteorological conditions. Emerging as a significant video force in the early 1990’s Bronson’s continuous merging of the structure of early video with contemporary installation and special effects continues to push the boundaries of science and art practice.

like transient day, excerpted from William Blake’s Book of Thel, takes as its theme the overly cliche'd, and in particular the exhausted subject matter of rainbows. The metaphorical and scientific meanings of color and language are juxtaposed as Pink Floyd meets Isaac Newton. Trained as a scientist, Bronson is interested in recapturing the awe that can be inspired by nature. like transient day is Bronson at her best; her exploration of such themes as perception, romanticism, minimalism and kitsch provide for both thoughtful and pleasurable viewing experiences.

Begun as a collaboration with California Institute of Technology scientists, Bronson’s LED artworks are moving text-based installations which are read by the viewer peripherally. In perpetual perceptual (speculative spectrum) (2006), red, orange, yellow, green, blue and violet light sticks flash a text referencing Goethe’s investigations of color perception. Each color corresponds to a word; the sensuality of the different hues is experienced in association with the contemplative corresponding text.

A celebration of the more mystical and romantic nature of the rainbow, William Blake (2006) emits the seven colors of the rainbow as they descend vertically down the gallery walls. In Helen Keller (2006), an all white LED flashes “remain colorless," referencing Helen Keller and the ultimate culmination of the color spectrum. A work about color and its absence, Helen Keller is Bronson’s attempt to make the invisible visible.

Landscape and decay are explored in landing grounding finding founding (2004), a four channel video installation which displays a continuous ten-minute tracking shot Bronson filmed as she walked through an overgrown streambed. On her exploratory walk Bronson captures the impermanence of the site from its pastoral green parts to its concrete industrialized sections. Bronson provides a mediated experience for the viewer as we follow her camera on an expedition to reclaim the indigenousness of the site.

golden itself (2004-6) is a documentary video triptych comprised of unedited footage of an olive tree in Bronson’s southern Californian backyard. Bronson’s interest in the olive tree emerged when her neighbors defeated a developer intent on having the tree destroyed. The question of how to illuminate the meaning of the tree without over determining it inspired Bronson to shoot the tree from three focal points. The sense of close, medium and distant is reiterated by the ambient soundtrack performance composed by noted musician Mark Lightcap. The viewer never sees all the images simultaneously, rather they are asked to make an association between the absent parts and construct a whole picture.