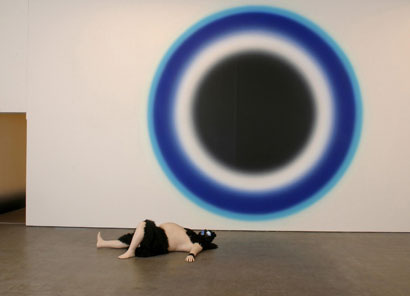 Ugo Rondinone - zero built a nest in my navel

Ugo Rondinone is an artist fascinated by the relationship between the artist and the world around him. Working across different media and styles, he references literature, music and theatre as well as the visual arts, creating sensory and theatrical installations.

Born in Brunnen, Switzerland, in 1964, he came to prominence in Europe in the early 1990s with installations combining photography, video, painting, drawing, sculpture, light and sound. His exhibitions can include India ink landscapes in the Romantic tradition or mesmerising target paintings recalling the trance-inducing images of 1960s psychaedelia. Pop art inspired works with an up-beat feel are often contrasted with the longing of photographs of a man and woman who never meet or films of clowns slumped in the corner of the gallery. Rondinone uses this plurality of forms and expressions to coexist individually but as a whole it is the exhibition that becomes the work of art.

For the Whitechapel, his first major UK exhibition, Rondinone creates a new installation that centres on a large structure in reflective Perspex, including new works shown for the first time. Like an open-ended maze, it frames a series of masks and sculptures that project an interior mental state onto a spectral, Gothic landscape. Meditative images will draw the viewer into speculating on their meaning, as Rondinone's works address a search for authentic experience. A pre-recorded dialogue loops in a darkened sensory environment and, like a Beckett play, presents a never-ending circle of disconnection. The exhibition title is taken from a number of haikus the artist has been writing every day like a diary and transferring onto canvas.

By refusing to adopt a signature style Rondinone's subject becomes the nature of artistic contemplation and the relationship between the artist and the world around him. His exploration of the balancing act between personal expression and cultural importance becomes an essay on the artist's situation and a fascinating journey for the viewer.

Events
Thursday 9 February, 7pm The Raven
Ugo Rondinone has used the raven as an embodiment of both humour and melancholy. Dr Boria Sax, author of Crow, explores images of the raven in art, literature, myth and history.

David Adjaye is one of the most sought after architects of his generation, designing buildings that emphasise the experience as much as the functionality of architecture. Refusing to adopt a signature style, he has instead chosen to explore scale, measure, space, light and material. Renowned for his domestic projects, the Whitechapel exhibition now focuses on his public buildings, with many designs and models shown for the first time.

Since establishing Adjaye Associates in 2000 Adjaye's greatest concern has been to intensify the experience of spaces, through an almost sculptural use of light, colour, tone and materials. This approach to creating spaces fuses the architectural with the artistic, and has led to collaborations with artists including Olafur Eliasson and Chris Ofili.

The Whitechapel exhibition explores Adjaye's built and planned public buildings in three sections that follow his practice from design to production. The first gallery brings together the architect's influences and source material, with images from his travels to non-Western cities shown alongside polaroid photographs representing an overview of his previous designs. The second gallery focuses on 10 of Adjaye's major public projects, either realised or currently in development. These will be illustrated with models, sketches and other materials. The third gallery screens films of completed civic projects, residential work and projects which combine art and architecture, accompanied by an original score by composer Peter Adjaye, the architect's brother.

David Adjaye has said, 'Buildings are deeply emotive structures which
form our psyche. People think they're just things they manoeuvre through. But the make-up of a person is influenced by the nature of spaces.' It is this combination of the sensual and emotive with a conceptual approach to the fundamental elements of architecture that makes David Adjaye one of the most exciting architects working in Britain today.

o The 10 projects that form the focus of the exhibition in the second gallery are: Idea Store, Chrisp Street, London, opened
July 2004; Nobel Peace Center, Oslo, Norway, opened June 2005; Idea Store, Whitechapel, London, opening September 2005; Art Pavilions with TBA-21 including the current Pavilion for Olafur Eliasson at the Venice Biennale, June - November 2005 then to be relocated; Stephen Lawrence Centre, Deptford, on site 2005; Bernie Grant Centre, Tottenham, on site 2005; Rivington Place, Shoreditch, on site 2005; Museum of Contemporary Art/Denver, on site 2005; Market Hall in Wakefield, on site 2006; Fairfield Housing, Hackney, on site 2006.
o David Adjaye was born in Dar-Es-Salam, Tanzania, in 1966, and studied a fine arts foundation course before architecture. After training with David Chipperfield Architects and Eduardo Souto De Moura Architects, he graduated from the Royal College of Art in 1993, when he also won the RIBA First Prize Bronze Medal. In 1994 he set up his own practice. His projects have included Elektra House and KPG House, 2001; Folkestone Library with Chris Ofili, and, Dirty House for Time Noble and Sue Webster, 2002; British Pavilion for Chris Ofili for Venice Biennale 2003; Frieze Art Fair, 2003-05.
o David Adjaye - Making Public Buildings is organised by the Whitechapel and curated by Andrea Tarsia, Head of Exhibitions & Projects.
o A fully illustrated publication, designed by Adjaye/Associates, will accompany the exhibition. Edited by Peter Allen and with essays by Kodwo Eshun, Okwui Enwezor, Nikolaus Hirsch and Saskia Sassen.
o Previous architectural exhibitions at the Whitechapel have included This is Tomorrow (1956), Nicholas Hawksmoor (1977), Christopher Wren (1982) and Mies van der Rohe (2002/03)