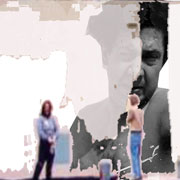 The point of departure for this project is the photographic archive of Mexican muralist David A'lfaro Siqueiros who compiled thousands of images over the course of his extraordinary life. As the title of the project suggests, the archive offers a politicized vision developed in the context of revolutionary struggles in Mexico and abroad. Unique in structure, content and intention, the archive was meant for the use of fellow artists as a means of inspiration and a source of found imagery. As Siqueiros wrote, “Nothing can give the [artist] of today the essential feeling of the modern era’s dynamic and subversive elements more than the photographic document." Its contents, images from the 1930s to the early 1970s, offer cultural and social portraits of different eras and nations from documentation of anti-fascist demonstrations in New York and the Watts riots in Los Angeles to significant moments in the history of Russian stage and Mexican cinema.

This multi-phase project began with an online digital image bank comprising approximately 5000 images from the archive at e-flux last summer. The original archive, housed at the Sala de Arte Pu'blico Siqueiros (SAPS) in Mexico City, has been utilized by international scholars and researchers publicly since the 1970s.. In the 1960s, while Siqueiros was engaged in both art and activism, he converted his house in the Polanco district of the city into a public art space. The house now functions both as a museum for Siqueiros’ work and a contemporary art venue. His collection of images was given over to the Mexican people as a legacy from David A'lfaro Siqueiros. Thanks to the digitizing of the images by the National Institute of Fine Arts of Mexico (INBA) and e-flux, these images are available on-line for the first time at http://www.e-flux.com/projects/siqueiros/

The exhibition will be presented at REDCAT (Roy and Edna Disney/CalArts Theater) in Los Angeles. As a venue for experimental curatorial practice, REDCAT supports new projects that showcase the work of artists practicing around the globe and down the street. In keeping with this engagement with the life of the city, artists Carlos Amorales, Julieta Aranda, Mark Bradford, Daniel Buren, Santiago Cucullu, Minerva Cuevas, Allan deSouza, Ken Gonzales-Day, Gabriel Kuri, Ken Lum, Mark Manders, Daniel Joseph Martinez, Mona Marzouk, Ruben Ochoa, Rube'n Ortiz Torres, Martha Rosler, and Anri Sala have been invited to respond to and elaborate upon the archive resulting in new works that will be presented in the gallery as well as public interventions to be presented as billboards across the city. In this way the original archive project and its reuse by contemporary artists is integrated with the dynamism of Los Angeles in a fulfillment of Siqueiros’ goal to combine the historical, social and artistic.

The concurrent billboard project by artists Mark Bradford, Daniel Joseph Martinez and Ruben Ochoa organized by Laxart and e-flux kicks off January 30-February 30, 2006, at Sunset Boulevard and Golden Gate Avenue with a project by Mark Bradford. Daniel Joseph Martinez’s billboard will be mounted at Santa Monica Boulevard and Highland and Ruben Ochoa’s billboard project will be launched at 7th and Wall Street from February 6-March 6.

An Image Bank for Everyday Revolutionary Life is a collaboration with Sala de Arte Pu'blico Siqueiros and e-flux and is made possible in part by the generous support of the Mondriaan Foundation; The Andy Warhol Foundation for the Visual Arts; Etant Donne's, the French-American Fund for Contemporary Art; The Consulate General of the Netherlands, New York; The Canadian Consulate General, Los Angeles; Andrea Rosen Gallery; Ford Foundation; Perry Rubenstein Gallery; The Puffin Foundation; and Conaculta. Additional support provided by Campari. In-kind support provided by Dynamic Images. Billboard project by Laxart