A group of sculpture 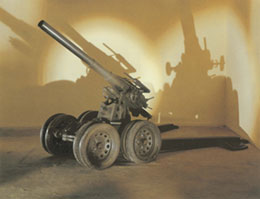 A group of sculpture

Gagosian Gallery is pleased to announce an exhibition of works by Pino Pascali (1935-1968). This group of sculpture represents the most complete survey of Pascali's work brought together in the United States.

Pascali is associated with Post-Minimalism and, specifically, with the Italian Arte Povera movement, whose protagonists sought to incorporate everyday life into art through the use of natural, organic and, often, unorthodox materials. In his short yet vital career (the artist died at the age of only thirty-two), Pascali displayed a subtle and sophisticated approach to the canon of sculpture. His sculptures function both as constructed objects and also as a distinct visual code.

This exhibition reveals all the major concerns of Pascali's art: from his 'weapons,' to his 'fake sculptures,' to his 'reconstructions of nature.' "Cannone Semovente" (illustrated above) is the largest work from Pascali's 'weapons' series, which is perhaps his most famous group of works. Assembled from found materials and painted olive-green, it faithfully recreates every detail of the weapon it mimics. However, the weapon's deadly function is denied, and it becomes instead an innocent, yet grandiose toy.

"Trofeo Bianco," "Testa di Drago" and "Pinne di Pescecane" are examples of the artist's 'fake sculptures"; objects achieved by stretching canvas over shaped structures that metonymically suggest parts of animals, both real and prehistoric. Pascali's three-dimensional forms seem to sit in that ambiguous space between fiction and reality, much in the same way that they share the syntax of appropriation associated with Pop Art whilst alluding to the simplicity of Minimalism.

"Ponte" and "Confluenze" are rightly considered two of Pascali's most important pieces. With these works, the artist strives to create a dream-like universe by employing organic materials, again situating the aesthetic object between the real and the ethereal; between the natural world and the private domain of his fecund imagination. It is this slippery stream of signification that marks the genius of Pascali's production and heralds his all-too short career as an important contribution to post-war art.

A fully illustrated catalogue featuring an interview with Maurizio Cattelan and an essay by Robert Lumley will accompany the exhibition.