An interactive installation. Peter Forgacs’s work is devoted to the period immediately preceding the Shoah. The film is projected onto five screens placed along the wall in the central space of the installation, with music composed by Tibor Szemzo. The walls along the way to the projection room bear chronologies, photos and prints, which provide an introduction to the historical context. 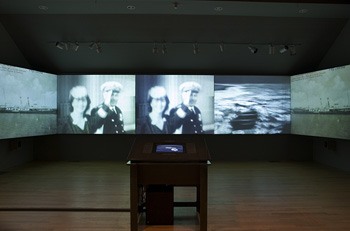 The Rippling Currents of the River. An interactive installation by Peter Forgacs and the Labyrinth Project

The Danube Exodus is a one-hour documentary Peter Forgacs made in 1997. It served as a basis of the interactive installation he created between 2000-2002 while a resident scholar at the Getty Museum, Los Angeles. After the Californian museum, he presented the installation at ZKM (Germany), CCCB (Barcelona), Kiasma (Helsinki) and the Judah Magnes Museum (Berkeley). Ludwig Museum, Budapest, is the first Hungarian institution to show the work, which in the summer will travel to the Donaufest, Ulm, and then on to Brussels.

Forgacs’s work is devoted to the period immediately preceding the Shoah. Expanding over a territory that includes Central and Southern Europe, the river Danube becomes the link between two stories that evoke, with spectacular vision and historical accuracy, the tragic experience of the peoples of the Danube valley in 1939-40.

The Danube Exodus immerses the viewer in three historical narratives. One story tells of Eastern European Jews fleeing Nazi persecution in 1939, trying to reach a ship on the Black Sea that will carry them to safety in Palestine. The second story, set in 1940 following the Soviet re-annexation of Bessarabia, tells of emigre German farmers abandoning their adopted homeland to return to the “safety" of the Third Reich but being relocated to occupied Poland. Both groups, each heading in the other direction, were transported along the Danube River by Captain Nandor Andrasovits (1894-1958), an amateur filmmaker, who documented these voyages. The third story focuses on the captain and on the river, whose rippling currents have interwoven many cultures and periods throughout Central Europe’s stormy history.

In his award-winning 60-minute film, Forgacs uses Andrasovits’s original 8-millimeter film footage, which he obtained from the captain’s widow. The 49-minute material on the Jews’ voyage was donated to him by historian-archivist Janos Varga.

The film is projected onto five screens placed along the longer wall in the central space of the installation, with music composed by Tibor Szemzo. On a touch-screen monitor in the center of the room, viewers can choose from 18 episodes of the full composition, each 4-5 minutes in length. Two smaller rooms are devoted to remembrance, one each for the memories of the Jews and the Germans, where viewers can access the personal stories via computers. Further touch-screens enable the visitor to wander through journals, interviews and memoirs from the passengers of the Queen Elizabeth.

The walls along the way to the projection room bear chronologies, photos and prints, which provide an introduction to the story and the historical context. A special role is given to details from the massive 18th-century encyclopaedia of Count Marsigli, devoted to the Danube. There is also a website available of The Danube Exodus, courtesy of C3: Center for Culture and Communication, Budapest, where visitors can access all the research material used for the installation. http://www.danube-exodus.hu