Reflex, approximately 100 works surveys his career from the late 1980s to the present. Muniz has made an international impact with his photographs documenting images he has made in an astonishing variety of non-art, often ephemeral materials, including dirt, sugar, wire, string, chocolate syrup, the circular paper remnants made by hole punches, and diamonds. They are often recognizable news images, works from art history, or portraits of well-known personages and are at once familiar and alien. 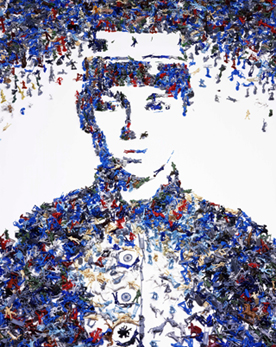 This MAM-organized traveling exhibition of approximately 100 works surveys the career of Brazilian artist Vik Muniz from the late 1980s to the present. Muniz has made an international impact with his photographs documenting images he has made in an astonishing variety of non-art, often ephemeral materials, including dirt, sugar, wire, string, chocolate syrup, peanut butter, fake blood, color chips, the circular paper remnants made by hole punches, and diamonds. Muniz’ images are at once familiar and alien. They are often recognizable news images, works from art history, or portraits of well-known personages. After an initial moment of recognition, it quickly becomes clear that these images are not what they first seemed. Through his witty images, Muniz honors, questions and subverts the traditions of representational art, treading the line between reality and illusion, representation and abstraction, idea and image, means and ends.

Beginning February 10, Miami Art Museum, provides visitors with a wide-ranging overview of the amazing dirt-to-diamonds artistic career of artist Vik Muniz. The exhibition will include more than 100 works and is curated by MAM Assistant Director for Programs/Senior Curator Peter Boswell. Following its Miami premiere, Vik Muniz: Reflex will tour to four venues in North America.

Muniz’ illusions have earned him critical acclaim and widespread recognition. Time Magazine named him one of its leaders of the new millennium and the New York Times has recommended his work as a sure-fire antidepressant, describing it as “an idea wrapped in surprise and laughter."

Imbedded in the accessible fun of Muniz’ images, is a reconsideration and insightful subversion of artistic tradition and the meaning of images. “I have always taken humor very seriously," Muniz says. “Humor and visual gimmicks operate at the most basic level of art appreciation. They create physical and perceptual responses that hold the viewer in front of the work a bit longer than usual. Once you achieve this tenacity, you can afford to be deep and erudite."

While at first his works can be seen as witty visual double-entendres, they pose complex questions about how visual information is developed, presented and interpreted. In the process, Muniz continually shifts between roles as painter, sculptor, draftsman, photographer, conceptualist, prankster and critic.

This MAM-organized exhibition includes more than100 works produced from 1988 to the present and includes images from all his major series, such as The Best of Life, The Sugar Children, Pictures of Thread, Pictures of Chocolate, Monads, Pictures of Magazines, and Pictures of Junk. This will be the first MAM-organized touring exhibition since Triumph of the Spirit: Carlos Alfonso, in 1997. After its premiere in Miami, Vik Muniz: Reflex will travel to the Contemporary Art Museum, University of South Florida, Tampa; the Seattle Art Museum; the Museum of Contemporary Art San Diego; and the Muse'e d’art contemporain in Montreal, Canada. Organizing touring exhibitions furthers MAM’s initiative to establish itself as one of the foremost institutions of modern and contemporary art in America. The museum is moving forward with its expansion and a new building under the leadership of newly appointed director Terence Riley who will take the helm at MAM in March.
Cloud Cloud

The exhibition will be extended beyond the museum’s walls with the latest installment of the celebrated Muniz series Cloud Cloud. Using the sky as his canvas and a skywriting plane as his tool, Muniz will create a line drawing of a cloud in the sky above Miami on consecutive days from February 9 to February 12. By drawing an image of a cloud in a place where we would expect to see a real cloud, Muniz underscores the difference between an object and the image of an object. The project also allows the public to witness a drawing-in-the-making as the plane creates elegant arcs across the sky. Muniz did a similar project to great acclaim above Manhattan in 2001 for the public art organization Creative Time. The project will be photographed by Muniz and the photograph will be added to the touring exhibition. MAM is collaborating with the artist and with the renowned Graphicstudio workshop at the University of South Florida to create a special limited edition print portfolio of the Cloud Cloud project. In Miami, Cloud Cloud is curated by MAM Assistant Director for Special Projects/Curator Lorie Mertes. The skywriting for Cloud Cloud is made possible in part, with assistance from AVIAD.

In this two-screen video by Italian video artist Grazia Toderi, a pair of Gemini space capsules are seen rotating within the dome of a Baroque church. The twin spaceships floating weightlessly within the church environment create a link between celestial and terrestrial space, between the dome of the church and the heavenly dome of the cosmos.

Grazia Toderi lives and works in Milan, Italy. She has appeared in solo exhibitions at the Castello di Rivoli in Turin, Italy; the Ludwig Museum in Cologne, Germany; and the Fundacio' Joan Miro' in Barcelona , Spain. She was awarded the Golden Lion at the 1999 Venice Biennial for her participation in the Italian Pavilion.