Art in Technological Times. A major art exhibition and far-reaching digital technology initiative, 010101 charts new developments in contemporary art, architecture and design as they evolve in, and are influenced by, a world altered by the increasing presence of digital media and technology. 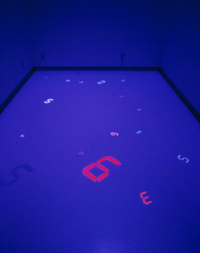 A major art exhibition and far-reaching digital technology initiative, 010101 charts new developments in contemporary art, architecture and design as they evolve in, and are influenced by, a world altered by the increasing presence of digital media and technology. Presented in the galleries and online, the exhibition features work (including many newly commissioned pieces) in all media by some thirty-five artists and designers.

Gallery Presentation (opening March 3, 2001) Technology is changing every aspect of our daily lives. The 010101 : Art in Technological Times gallery exhibition shows how artists are responding to these gadgets and gizmos, screens and scrims that now surround us. It also shows them crystallizing the larger forces, such as globalization, the near pornography of available information and forms, and the increased fluidity of our identities, these bits and bytes imply.

In the 010101 SFMOMA galleries, visitors will find a range of such video works, sculptures, design projects, computer-driven installations, traditional drawings and paintings, and new art works commissioned for the gallery. There is a an intense sense of experimentation with new forms and formats technology makes possible. This is true both for the methods of making art (like digital design) and viewing it (like the Internet). Other artists have chosen to reflect on technology by mining what are still the considerable expressive powers of traditional media. What makes this art worth looking at is its ability to help us see forces that often seem too large and abstract for us to hold onto. Artists, in other words, are adopting technology in the studio, deploying it in the gallery, inhabiting it on the Internet, and making work that reflects its presence in society in a stunning range of ways.

The artists exhibiting their work in these galleries do not all think of themselves as being "high-tech," but they do take advantage of what technology can do for them. Their work is driven less by the devotion to a distinct medium or style than by the will to articulate certain ideas and situations in visible, tangible form.