Coliseum. The exhibition consists of four video works that explore the shifting relationships between work and play, talk and action, the daily and the dramatic. It is a clear-eyed picture of groups of friends, colleagues and co-workers coming together in a communal forum. Pilson has installed each work in a deliberate way, forcing each piece into conversation with the others. 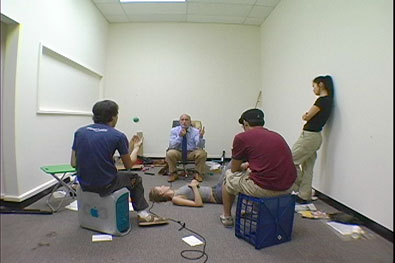 Nicole Klagsbrun Gallery is pleased to present, Coliseum, a solo exhibition of videos by John Pilson, running from March 4 until April 1, 2006. A reception for the artist will be held on Saturday, March 4, from 6-8 p.m.

Coliseum consists of four video works that explore the shifting relationships between work and play, talk and action, the daily and the dramatic. It is a clear-eyed picture of groups of friends, colleagues and co-workers coming together in a communal forum. Language and rhythm are constants in each piece, as men discuss arcane knowledge and women fight. Pilson has installed each work in a deliberate way, forcing each piece into conversation with the others. While previous work has been about the theatricality of space, these new works cinematically examine the nature of a group portrait.

A simple conversation about sports unfolds into a meditation on memorabilia, male intimacies and shared languages in Sunday Scenario, a three channel video depicting three men recalling and debating baseball’s greatest moments. The spaces and circumstance (an office, a suburban forest, a master bedroom) of each participant tell a different story. Their opinionated discussion rises and falls, as small pictures pop up on screen, illuminating the person or place under discussion.

One woman fends off a multiple person attack in Rondori, a traditional Aikido sparring exercise. Each black-belt aggressor moves through a space extended by multiple (and simultaneous) camera view points. The combatants exchange blows with balletic precision while the punishing thuds of bodies and strenuous breathing belie their easy movement.

In Wisdom and Charisma, a group of middle-aged men, who used to play Dungeons and Dragons twenty years ago, meet after work for a session of the role-playing game. Seated around a corporate boardroom table, the Dungeon Master, dressed in red, leads the others in debating pathways through astral planes and portals of pandemonium while stationary, control room-like, cameras allow for the reactions and silent exchanges between the players to be fully scrutinized. Their clothes and body language indicate their executive occupation and social standing, a strong contrast to their adolescent pastime.

Seven British (and one Canadian) actresses give an impromptu (and improbable) performance of the opening monologue from David Mamet's GlenGarry GlennRoss in The London Cast. Through editing, each performance is blended into a single monologue. The harangue of the salesman is spread across the seven voices while the various interpretations and acting styles suggest competitive performances within a play about competition.

Pilson’s work has a realism that avoids romanticism, sentimentality or nostalgia in favor of an emotionally neutral and objective view. These works beautifully illustrate Pilson's thoughts about the nature of discussion and confrontation, while underscoring the humanism inherent in all of his work.

John Pilson lives and works in New York City. This is his third solo show with the gallery. Previously, his work has been included in Premieres, at the Museum of Modern Art, New York in 2005; in Moving Pictures at the Guggenheim Museum, New York; in The Americans- New Art, at the Barbican Gallery, London in 2001; and in Greater New York at P.S.1 in 2000. He was the recipient of the Baloise Prize for Art Statements at the 2002 installment of Art Basel in Switzerland. He has also received the Young Artists Special Prize at the 49th Venice Biennale in 2001. His work has been accessioned into numerous public collections.