Close Up offers an opportunity to see artist's cinematographic side, with the combination of cinema, film and video extending to the medium of photography. The exhibition includes the slide projections of Transformer, the extensive series and tableaus of Stauffenberg-Block, and To Look at the Sun at Midnight III/196. 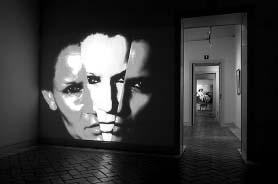 Born in Prague in 1944, Katharina Sieverding has made a major contribution to opening up the concept of art and to interdisciplinary medial practice. Since the 1960s she has been working both in film and photography, using extremely large formats to construct, deconstruct and reconstruct her own portrait, gaining international acclaim by asking challenging questions of the politics of representation, gender and postcolonialism. Her work has frequently triggered debates on contemporary society, politics, social and cultural issues, one example being her collaboration with KW on the 1993 poster installation Deutschland wird Deutscher. Katharina Sieverding firmly believes that a responsible contemporary artistic practice must be politically committed, and that artistic practice has the task to develop complex positions that not only represent the accelerated processes of the present, but also critically reflect upon them. The action Die Pleite began in late September 2005, with posters in several hundred locations in Berlin. They showed an abstract image of a total eclipse of the sun, with the title appearing in the centre as a reference to the eponymous journal edited in the 1920s by George Grosz, Wieland Herzfelde and John Heartfield.

Close Up offers a unique opportunity to see Sieverding's cinematographic side, with the combination of cinema, film and video extending to the medium of photography. To mention only a few individual works on show, the exhibition includes the large-scale slide projections of Transformer (1973/74) in their dedicated spaces, the extensive series and tableaus of Stauffenberg-Block (1969) which cover entire walls, and To Look at the Sun at Midnight III/196 (1973). For the first time ever, the entire complex of Ultramarin I-XII (1993) will be on show. Displayed on a mural developed especially for Budapest this work will form the focal point of the exhibition in the Ludwig Mu'zeum. In addition to some of Sieverding's most important serial photographic neon installations, such as the 336-part Motorkamera (1973/74) and the 196-part silver gelatin work with the title I-VIII/196 (1973), early monumental works from the legendary pioneering serial Grossfotos 1-X (1975-77) will be presented, including the picture which caused a censorship scandal in 1976: Vorsitzender Mao Tsetung begrubt Prasidenten Dr. Siaka Stevens herzlich. Next to films such as Life-Death, Berlin (1969) and China, September - Oktober 1978, Beijing, Xanan, Xian, Luoyang (1978, by Klaus Mettig and Katharina Sieverding), the latest data images from the serial Kontinentalkern such as XVII/1980 will be LCD-projected. The latter will be juxtaposed with the double DVD projection Shanghai 2002/03. In addition, Sieverding will relate her work to the context of the political and social climate of the 1960s and 1970s in a curated archive. T.V. Sampler (1978-2001) presents television reports on Sieverding's work and a documentation on the closing of the Joseph Beuys master class at the Staatliche Kunstakademie Dusseldorf, Akademie Dusseldorf (1969). Visual Studies I/2002 marks the beginning and the end of the show, which offers an encompassing overview of Katharina Sieverding's oeuvre from the late 1960s to the present day.

The New York exhibition was organized by P.S.1 director Alanna Heiss with P.S.1 curator Amy Smith-Stewart and the freelance curator Daniel Marzona, and is a result of close collaboration between KW Institute for Contemporary Art, Berlin, and P.S.1\MoMA, New York. The exhibition was redesigned for the Berlin show by KW director Gabriele Horn in close collaboration with Katharina Sieverding.

We would like to thank the director of the Ludwig Mu'zeum, Katalin Ne'ray, and curator Dr Vera Baksa Soo's for making the exhibition in Budapest possible. The exhibition at Ludwig Mu'zeum has been extended by some works and was curated by Alanna Heiss and Gabriele Horn in cooperation with the artist.

The catalogue was financed by Kunststiftung Nordrhein-Westfalen, Dusseldorf.

Katharina Sieverding: Close Up was made possible by generous support from the Capital Cultural Fund, Berlin. Additional support came from Rosa and Gilberto Sandretto and Julia Stoschek. The exhibition at the Ludwig Mu'zeum in Budapest 2006 receives significant funding from the Kunststiftung Nordrhein-Westfalen, Dusseldorf and from the ifa-Institut fur Auslandsbeziehungen, Stuttgart. We would like to thank the Friends of the KW Institute for Contemporary Art for supporting the poster installation.