A group exhibition of 7 emerging artists from the media-saturated terrain of Southern California. Part technological history, part emergent media, and part theoretical response to these media and their innovators, the show investigates the current debates of communications literacy and the extent to which we are constituted by our technologies. 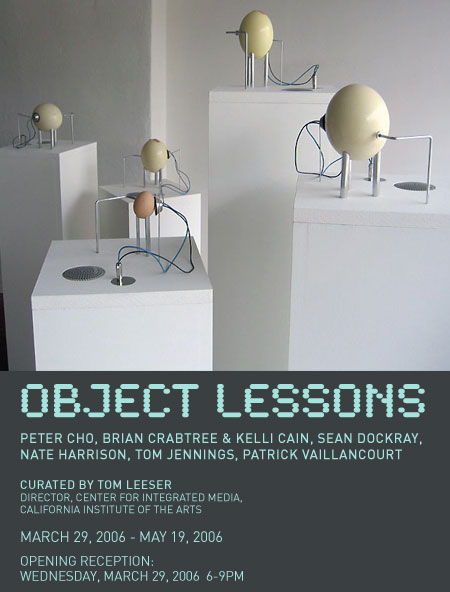 Part technological history, part emergent media, and part theoretical response to these media and their innovators, Object Lessons investigates the current debates of communications literacy and the extent to which we are constituted by our technologies.

Patrick Vaillancourt: Celebrating a Rediscovery of the Intentionally Erased takes six number-one pop hits from the past fifty years and transforms them into a series of comprehensive drones, to kill the hook, in order to erase the effects of pop music on the mind. By reducing each song to an almost painful experience, a poetic confrontation with the base elements is made possible.

Tom Jennings: Story Teller is a self-contained system for telling stories, which are stored as rows of tiny holes in long spools of paper tape. The stories are on a wide range of subjects, but they are all about text, mediation, representation and deconstruction.

Nate Harrison: Can I Get An Amen? is an audio installation that unfolds a critical perspective of perhaps the most sampled drums beat in the history of recorded music, the Amen Break. The work attempts to bring into scrutiny the techno-utopian notion that 'information wants to be free.' it questions its effectiveness as a democratizing agent.

Sean Dockray: Cabinet is based on a research project in which the recorded and archived the applauses he has received as a performer and in doing so has documented the temporary moments when we leave our isolated bodies and become part of a collective body, with its own temperament and desires. The cabinet itself is a homemade device that has been designed around its contents, much like a library's card catalog furniture is based on the dimensions of a single index card.

The Center for Integrated Media is an interdisciplinary, peer-to-peer experiential learning and studio environment for CalArts graduate students and visiting artists wanting to explore and critique computer programming, interactive systems, the Internet, digital video and digital audio technologies as part of their artwork. The Center is designed for artists whose work has reached an advanced degree of development and who possess the desire to integrate multiple forms of media into new modes of expression, while opening up critical dialogues between artists, scientists and writers on issues related to new forms of media.

An electronic catalogue, co-produced by CalArts and Gigantic ArtSpace, is forthcoming.