Distillation of time and obliteration of information characterize her drawings and sculptures. Her films on paper are minimal compositions of blurred lines consisting of the superimposition of the subtitles of an entire movie. All of her work involves translation, transposition and reconstruction. 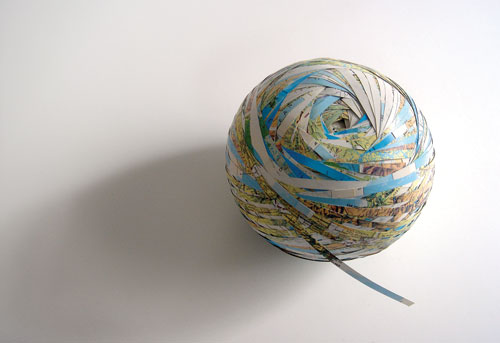 The Year of Spaghetti

Josee Bienvenu Gallery is pleased to present Stefana McClure's fourth solo exhibition in New York. Stefana McClure turns text into image. Distillation of time and obliteration of information characterize her drawings and sculptures. Her films on paper are minimal compositions of blurred lines consisting of the superimposition of the subtitles of an entire movie. All of her work involves translation, transposition and reconstruction. In this new exhibition music is changed into text, text is turned into image; a world atlas becomes a globe.

The Year of Spaghetti (from the title of a short story by Haruki Murakami) consists of three new bodies of work: "played" and "typed" drawings on Teflon, manga and comic strip drawings along with some small paper sculptures. There is also a 36-minute single channel video produced in collaboration with Jill Baroff.

The music into text and text into image drawings are "played" or "typed" on virtual keyboards by pianists, typists and stenographers wearing special gloves that have been modified to bear an IBM Selectric golfball at the end of each finger. The golfball elements rotate freely so that each of their 88 characters has an equal chance of being represented. Some of the "typed" texts are by Georges Perec whose work was dominated by the use of "constraints" others are by Gertrude Stein who reveled in repetition. The music into text pieces range from Frobeger's Suite in E Minor for harpsichord to Robert Schumann's piano duets.

The manga and comic strip drawings relate strongly to her earlier films on paper, concentrating the dialogue of entire comic books into single drawings, each new layer of text covering, but not quite obliterating the one that went before it. Osamu Tezuka's Atom Boy, Katsuhiro Otomo's Akira and Frank Miller's Sin City are among the works presented. The paper sculptures deconstruct books (often lengthy ones such as Herman Melville's Moby Dick or Reader's Digest Atlas of the World) and reconfigure them as continuous balls of string...

Originally from Northern Ireland, Stefana McClure spent twelve years in Japan; she now lives in New York. Recent and upcoming exhibitions include: The Shape of Time, Kunstverein Grafschaft Bentheim, Neuenhaus, Germany; films on paper, Galerie Yvon Lambert, Paris (project room), New Acquisitions, The Indianapolis Museum of Art, IN; Pages, I Space, The Chicago Gallery of the University of Illinois at Urbana-Champaign, IL. Her work is included in the following public collections: The Museum of Modern Art, New York; The Indianapolis Museum of Art, IN; The Baltimore Museum of Art, MD; The Museum of Fine Arts, Houston, TX; Yale University Art Gallery, CT.