The acclaimed Chinese-born artist known internationally for his elaborate sculpture installations and gunpowder projects, has been invited to create a site-specific exhibition for the 2006 season of The Iris and B. Gerald Cantor Roof Garden. Contemporary retrospective of Betty Woodman that includes some 70 examples of early utilitarian objects, ceramic sculpture, wall installations, paintings, and drawings. 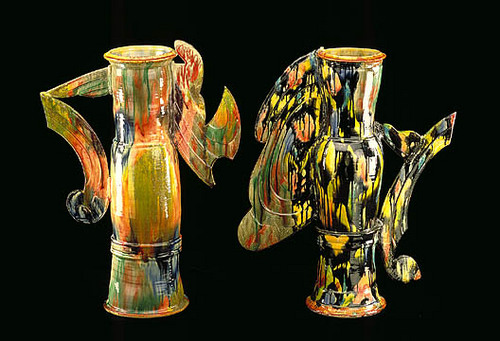 Cai Guo-Qiang, the acclaimed Chinese-born artist known internationally for his elaborate sculpture installations and gunpowder projects, has been invited to create a site-specific exhibition for the 2006 season of The Iris and B. Gerald Cantor Roof Garden at The Metropolitan Museum of Art. The four works comprising Cai Guo-Qiang on the Roof: Transparent Monument were inspired by the dramatic setting of the Roof Garden, an open-air space atop the Lila Acheson Wallace Wing that offers spectacular views of Central Park and the Manhattan skyline, and by the artist's reactions to issues of present-day concern. "Cai is, without doubt, one of the most inventive artists working today in New York and indeed internationally, and this exhibition will mark many 'firsts' for the Metropolitan," commented Gary Tinterow, who is Engelhard Curator in Charge of the Museum's Department of Nineteenth-Century, Modern, and Contemporary Art, and who invited Mr. Cai to create the installation. "Cai Guo-Qiang on the Roof will be the first solo exhibition by a contemporary Chinese artist to be held at the Metropolitan. His method of combining traditional Chinese motifs and materials to comment on contemporary life makes his work particularly relevant in the context of an encyclopedic museum, and especially moving to anyone who has been touched by the September 11, 2001, attack on New York."

Works on view will include the 15-feet-tall glass Transparent Monument, at the base of which lie replicas of dead birds. "Like a transparent sculpture or canvas," says Cai, "the glass encases the city and park, fusing them with the work as one, and bringing out the relationship between the city, or civilization, and park, or nature."

The installation will also feature Move Along, Nothing to See Here, a pair of life-sized replicas of crocodiles, cast in resin and pierced with several thousand sharp objects confiscated at airport-security checkpoints, that will loom over the Roof Garden space.

Finally, an ephemeral sculpture titled Clear Sky Black Cloud will consist of an actual black cloud appearing above the Roof Garden at noon on Tuesday through Sunday of each week, bursting like an inkblot in the sky and then dissipating slowly in the air. This recurring work, made from miniature black-smoke shells, will set a new and symbolic clock for New York City for the duration of the exhibition.

Born in 1957 - the son of a historian and landscape painter in Quanzhou City, Fujian Province - Cai Guo-Qiang (pronounced sigh gwo chang) developed a desire to become an artist at an early age. As a teenager, he was absorbed in the martial arts and even acted in some kung-fu movies. Educated in the traditions of Western art, Cai first encountered Western contemporary art as China entered an era of intense social change. Not able to find a school offering classes in contemporary art, he studied stage design from 1981 to 1985 at the Shanghai Drama Institute. He also experimented with gunpowder to foster spontaneity and to confront the suppression that he felt from his controlled artistic and social climate. At the end of 1986, when he moved to Japan, he began to explore the properties of gunpowder in his drawings, an inquiry that led to experimentation with explosives on a massive scale, and the development of explosion events, exemplified in his renowned series Projects for Extraterrestrials.

Cai achieved international prominence while living in Japan, and his works began to be shown widely around the world. His approach draws on a wide variety of symbols, narratives, traditions, and materials, such as astrophysics, feng shui, Chinese medicine, dragons, roller coasters, computers, vending machines, and gunpowder. Among his many awards to date is the Golden Lion Prize of the 48th Venice Biennale International. Cai moved from Japan to the United States in 1995, and now lives in New York with his family.

The artist's principal projects include Tornado: Explosion Project for the Festival of China, Kennedy Center for the Performing Arts, Washington, D.C., 2005; Inopportune, a four-stage exhibition presented at MASS MoCA, 2004-2005; Light Cycle, an explosion project for New York's Central Park on the occasion of its 150th anniversary, 2003; Ye Gong Hao Long: Explosion Project for Tate Modern, Tate Modern, 2003; Transient Rainbow, Museum of Modern Art, New York, 2002; Flying Dragon in the Heavens, Louisiana Museum of Modern Art, Humblebaek, Denmark, 1997; The Earth Has Its Black Hole Too, Hiroshima, Japan, 1995; and Project to Extend the Great Wall of China by 10,000 Meters, Jiayuguan City, China, 1993. He also curated the first China Pavilion at the 51st Venice Biennale in 2005.

The curators for Cai Guo-Qiang on the Roof: Transparent Monument are Gary Tinterow, Engelhard Curator in Charge, and Anne L. Strauss, Associate Curator, both in the Department of Nineteenth-Century, Modern, and Contemporary Art at The Metropolitan Museum of Art. Exhibition design is by Daniel Kershaw, Senior Exhibition Designer, with graphics by Sue Koch, Senior Graphic Designer, both in the Museum's Design Department.

The Iris and B. Gerald Cantor Roof Garden opened to the public in 1987. Annual installations have featured selections of modern sculpture from the Metropolitan Museum's collection and, most recently, presentations of works by the artists Ellsworth Kelly (1998), Magdalena Abakanowicz (1999), David Smith (2000), Joel Shapiro (2001), Claes Oldenburg and Coosje van Bruggen (2002), Roy Lichtenstein (2003), Andy Goldsworthy (2004), and Sol LeWitt (2005).

The Cantor Roof Garden will open to the public this year from April 25 through October 29, weather permitting. Sandwiches and beverage service - including espresso, cappuccino, iced tea, soft drinks, wine, and beer - are available at the Roof Garden daily from 10:00 a.m. until closing

The installation is made possible by a grant from Cynthia Hazen Polsky and Leon B. Polsky.

The Art of Betty Woodman

The Metropolitan Museum of Art will present the first U.S. retrospective of the work of noted artist Betty Woodman (American, b. 1930) from April 25 through July 30, 2006. The Art of Betty Woodman will span the artist's career, from her early works of the 1950s and 1960s through her most recent mixed-media pieces of 2005-2006, and will assess her contributions to contemporary ceramic art and her importance among post-World War II artists.

Betty Woodman began her career with clay as her chosen medium. The vase was her earliest - and over time, it has become her most salient - subject. For Woodman, the vase can be a vessel, a metaphor, or an art-historical reference. Her work alludes to and infuses numerous sources, including Minoan and Egyptian art, Greek and Etruscan sculpture, Tang Dynasty works, majolica and Se'vres porcelain, Italian Baroque architecture, and the paintings of Picasso and Matisse.

The exhibition is made possible by the Samuel I. Newhouse Foundation, Inc.

Woodman's conceptual boldness and her ambitious experimentation - in which she combines such unlikely materials as lacquer paint on earthenware and terra sigilatta, a slip glaze often used on ancient ceramics, on paper - have produced a unique and significant series of innovations. This is particularly evident in Deco Lake Shore (2003, Metropolitan Museum), a large, colorful drawing on handmade paper in which Woodman combines graphite and ink with terra sigillata and wax. Although this work relates to her ceramics - in particular, to her 2001 ceramic diptych, Bonnard and his Ladies #1 - in terms of its deco-like design, its imagery, and the unusual use of media, it can be viewed as an independent work of art that explores her painterly sensibilities.

The exhibition will include wall reliefs such as Balustrade Relief Vase 97-15, a promised gift to the Metropolitan Museum. Works in this series especially highlight Woodman's interest in the Baroque architecture of Italy, where she has spent part of each year working since the mid-1960s. There will also be a variety of works from her acclaimed "Pillow Pitcher" series. One of her most successful forms, it is loosely based on Cretan pitchers and is made by joining two cylinders end to end with the remaining ends pinched to closure - the form now connoting the kind of volume in an overstuffed pillow while retaining a sense of the utilitarian. The Ming Sisters (2003, Metropolitan Museum), a monumental triptych, is one of a number of recent works inspired by Woodman's longstanding investigation of the arts and crafts of the East. It is boldly colored, depicting her vision of motifs seen on trips to Japan and Korea.

To complement The Art of Betty Woodman, the artist will create five large flower urns that will be placed in the niches and on the Information Desk of the Museum's Great Hall. For the duration of the exhibition, these urns will hold the large starburst arrangements of fresh flowers that are refreshed each week, thanks to an endowment provided by the late Lila Acheson Wallace.

The exhibition is organized by Jane Adlin, Assistant Curator in the Metropolitan's Department of Nineteenth-Century, Modern, and Contemporary Art.

It will be accompanied by a fully illustrated book with a foreword by Jane Adlin and scholarly essays by Barry Schwabsky, Janet Koplos, and Arthur Danto. The book will be published by Monacelli Press to coincide with the opening of the exhibition.