Franz Ackermann makes large-scale dynamic installations that are built up from individual components comprising paintings, drawings, photographs, wall drawings and sculptural, billboard-like constructions. The installation of Cerith Wyn Evans is a complex image-sound arrangement which was developed during a visit to Mexico City and is inspired by the work of the modernist architect Luis Barragan. 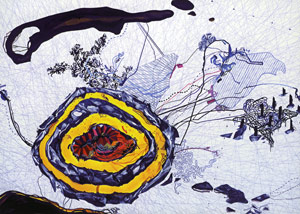 'The daily practice of painting, in Ackermann's case, amounts to nothing less than an attempt to redefine the discipline itself, not as a stable given, but as a fluid, self-differing medium constantly branching out into new territories.'

White cube is pleased to present a new exhibition of works by Franz Ackermann. Ackermann makes large-scale dynamic installations that are built up from individual components comprising paintings, drawings, photographs, wall drawings and sculptural, billboard-like constructions. Ackermann uses the gallery space as an extension of his studio, the site where the installation is finally constructed and finished. Colourful and architectural, his abstract works function as elements within a greater system - an imaginary mental topography that explores notions of travel, urbanism and globalisation, connecting the specifics of disparate locales. His installations map real and imaginary places, buildings and urban layouts, but are as much about the fantasy of escape as they are political gestures in an ever-shifting world.

Ackermann's work frequently deals with the double side of tourism - the glamour, speed and consumption of international travel but also the detritus, architectural scarring and garbage that it leaves behind. His paintings deal with illusionary points of view, bringing together details from far away places to ones that are closer to home, seeing the city as a lens through which other places are represented. Entitled 'Home, home again' after a Pink Floyd song, this exhibition will bring together a series of large-scale paintings, numerous drawings and floor and wall based sculptures that focus on London as their conceptual point of departure. For the first time, Ackermann will present a large-scale drawing that is a metaphorical link between his ongoing mental map series - watercolours made while on the move in hotels around the world - and his paintings, constructed from memory in the studio.

The show will also examine the relationship between tourism and terrorism - the spectre of international travel - as well as the way that cities are constantly in flux, in the case of London, looking towards the Olympic games in 2012 that will irrefutably change the layout of our existing city. Always site-specific, his work comments on the architecture of the space it inhabits, whilst inviting the viewer to enter its proposed geographical space. Ackermann's paintings fuse various perspectives in one image, from distant to close up or simultaneously from above and below creating an ungrounded, all-over terrain that recalls the energy of Italian Futurist paintings or the visual delirium and alienation that one experiences in new cities. The work is predicated on the roving eye of the artist, the travelling fl a neur, which can be traced from Baudelaire to the ubiquitous contemporary tourist.

Cerith Wyn Evans
The Curves of the Needle

White Cube is pleased to present The Curves of the Needle, an installation by Cerith Wyn Evans. The installation is a complex image-sound arrangement which was developed during a visit to Mexico City, where the artist was invited to make a work inspired by the house and museum of the modernist architect Luis Barraga'n.

Casa Barraga'n, a curious combination of austere monasticism and romantic theatricality has become an iconic modernist building, reproduced in images that fetishize its open-plan interior and signature use of colour. Still kept in its original state, the interior of the house - full of the material traces of the architect’s life - appealed to Wyn Evans who has long been interested in the idea of parallel forms of communication and, in particular, the notion of invocation.

Employing two slide machines and a dissolve unit, an encyclopaedia of images ranging from motifs of the architecture, elements of the surrounding city, or simply images from elsewhere are syncopated together with an arranged musical score taken from the architect’s enormous music collection, numbering literally thousands of vinyl records. The images slowly dissolve into each other to create a psycho-geography, a fantastical, dreamscape that shifts between the vista and the detail, the past and present.

Wyn Evans was drawn to the sonic possibilities of the architecture after noticing that Barraga'n installed record players in almost every room of his house. Organising for a selection of tracks to be played on the various turntables (in themselves a kind of technological timeline of the architect’s life dating from primitive early players to a 1970s Danish sound system), Wyn Evans then recorded the results, keeping the ambient sounds in the background so that the resultant soundtrack acts as a field recording within the architecture. For Wyn Evans, the process of selection and playing records became 'another kind of technological archive mapped onto the house’s, already very specific, architecture.’ Parallel to his investigation of the record collection, the artist took thousands of photographs while exploring the house and so, in this way, the project became about reclamation, of the 'un-photographed’ interstitial spaces of the building and of the sound archive of (recently) unplayed records.

Wyn Evans’ work is often characterised by the clarity of a single conceptual idea that may take many material forms, filtered through a highly refined aesthetic. His firework pieces, for example, are wooden structures that spell out, open-ended texts that burn over a designated period of time. His chandelier sculptures are programmed to evoke an otherworldly language from sections of text translated into the flashing light signals of Morse Code. Wyn Evans is also interested in the way that soundtracks form a parallel 'text’ for a film or photograph and in the slippage created when these sounds are dislodged, changed or removed. The title of this installation derives from an essay by Theodor Adorno, written in 1927 (subsequently amended in 1965) that examines the notion of music as a psycho-cultural portrait of the listener: 'What the gramophone listener actually wants to hear is himself…most of the time records are virtual photographs of their owners, flattering photographs - ideologies.’ Wyn Evans is interested in relaying this to the relics of Barraga'n’s life, to create a correspondence or a 'kind of friction between what is perceived as real life, and what is constructed as memory, phantasy and projection…’.

'The Curves of the Needle’ originates from 'The Air is Blue’, a site specific exhibition organised by Hans Ulrich Obrist at Casa Barraga'n, Mexico City (2003) and subsequently developed into '299,792.458 m/s’ an exhibition at BAWAG Foundation, Vienna (2005).

A publication accompanies the exhibition produced by the BAWAG Foundation as part of a series of editions.