More very young - though excellent - emerging galleries from the First Call and Young zones highlight the dynamic character of artbrussels, together with the “one man shows" they exemplify the truly innovative spirit of the fair with a strong international profile: 32 local galleries are being joined by other 20 from Europe, North America and Asia. 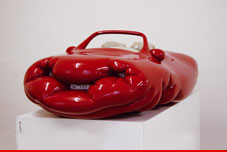 The European platform for contemporary art

Brussels, the capital of Europe is increasingly profiling itself as a cosmopolitan and multicultural city with an intuitive feel for contemporary art. As a country, Belgium can be proud of the number of its art collectors with world-class collections. Numerous companies are also translating this passion for art into one of the cornerstones of their corporate culture. It is precisely this depth of private initiative and professionalism that combines galleries, collectors and public institutions which gives artbrussels its unique character. artbrussels has identified itself as the international contemporary art fair of the moment, attracting participants from 20 countries. And through a rigorous selection process that limits the number of galleries taking part, the event has a genuine brilliance that gives it an edge.

The very young - though excellent - emerging galleries from the First Call and Young zones highlight the dynamic character of artbrussels, together with the “one man shows" they exemplify the truly innovative spirit of the fair. artbrussels tracks the trends and movements in the international art world closely and as such will be introducing a new zone: Modernist and Contemporary Design. This is a natural choice and evolution as contemporary art and the high-end of the design sector address a similar audience, and thus direct themselves to identical markets. The synergy between the two is clear.

artbrussels expects its VIP programme to draw the attention of around 600 national and international collectors, art professionals and critics, and over 750 journalists from Belgium and the rest of the world. Previous figures confirm its appeal, with a record number of art lovers (over 32,000) spending on average six hours at the fair. It’s no great surprise - given the composition and standard - that more than any other event in Belgium artbrussels is year after year the place where the entire international art world comes together. artbrussels, one of the European top contemporary art fairs A rigorous and thus strong selection with an international character artbrussels has developed a reputation as one of the most significant contemporary art fairs. Limiting the number of participating galleries contributes to the high standard of artworks on display, but also to the homogenous nature and clarity of vision of the fair. The exhibiting criteria are tough, with only one in three galleries receiving a positive response from the selection committee. However this committee carefully considers each and every request, ensuring that only galleries which show artworks of exceptional quality or promising new talent are included. The international profile of the fair is also without doubt: 32 Belgian art galleries are being joined by their colleagues from 20 different countries in Europe, North America and Asia. The international selection committee: Albert Baronian - Baronian-Francey (B), Elena Buchmann (D/CH), Rebecca Camhi (GR), Elga Conrads (D), Jo Coucke - Deweer Art Gallery (B), Rodolphe Janssen (B), Nathalie Obadia (FR), Tanya Rumpff (NL) Space, timing and a record number of visitors. artbrussels is being organised in Halls 11 and 12 of Brussels Expo. A detailed architectural space plan has been created to guarantee that both exhibiting and visiting is a highly pleasurable experience.

artbrussels opens its doors in 2006 from the 21st, up to and including, the 24th of April, with the Preview and Vernissage on Thursday 20th April. The 2005 edition demonstrated that the decision to reduce the fair by one day was an inspired initiative: the number of visitors is growing steadily and gallery owners are being spared fair-fatigue! We can already confirm a record number of 32,000 visitors. Clear, Strong and Innovative Zones

For the second time in a row, the First Call zone offers 14 international creative newcomers a special opportunity. A collector’s committee has identified the emerging galleries and participation is by invitation only. The First Call zone will be animated by illy, who will create an atmospheric coffee lounge as a backdrop. In addition illy is also awarding a prize to an artist represented by one of galleries included in the First Call zone.

This zone is reserved for 40 galleries who will be displaying works from a maximum of five promising but unestablished young artists. “One man shows" in partnership with ING Belgium In 2006 the “one man shows" will highlight the contemporary and innovative character of the fair, with 20 projects from recognised or young artists that give a representative overview of the latest trends within contemporary art. This zone forms one of the elements of the fair that extends huge pulling power over not only collectors, but also museums and the press. A remarkable aspect of the artists selected this year is that 30 per cent are actually ‘one woman shows’. This is a reflection of a striking evolution: more and more young women are being taken seriously as artists and making their mark in the once so male-dominated art world. The Belgian Collectors Committee (Jacqueline d’Amecourt, Wilfried Cooreman, Mimi Dusselier, Filiep Libeert, Baudoin Michiels, Benedikt van der Vorst and Bruno Van Lierde) has chosen works of only the highest standard. ING Belgium supports the “one man shows" and also contributes to the financing of the exhibition space. On top of that, ING Belgium also presents the top prize-winning artist with €10,000. The winner will be announced during the press conference, which takes place on 20th April, where the cheque will also be presented.

artbrussels introduces a brand new zone with modernist and contemporary design This year artbrussels introduces a brand new zone with the cre'me de la cre'me from the field of modernist and contemporary design. For the first time, 10 of the most internationally renowned galleries in the field will present sublime, unique pieces with an exceptional artistic and historical value, as well as limited editions from young designers working with the established global design names. For this zone three Belgian, five French, one German and even one Chinese design gallery has been selected. Design has never been so popular. The time when the art world would look down on design has gone. No longer is the term ‘design’ used in a derogatory sense - a synonym for a purely decorative and commercial approach without any depth or critical attitude. As appreciation and knowledge of design has increased, so has the awareness that good design by definition has its own aesthetic and social value, which surpasses the merely decorative. At its best, an object can achieve the status of iconic; a sign of the times or the totem that encapsulates an era. However design is also still very much part of a daily reality, and its needs, dreams and desires - a quality that is sometimes absent in contemporary art. In order to avoid creative isolation, more artists are exploring the crossovers with design. Design functions as an experimental playground where artists feel less constrained by the pressures of the art world. As design has attained a growing recognition, so its own history has developed and this has in turn evolved into an interest in design as an expression in itself - a fascination that is heightened by the scarcity of historic design icons that have been preserved, a consequence of decades of disinterest and neglect. Another consequence is inflated price tags. Parallel with the increased recognition, the design market is also subject to a profound transformation, specifically in the sector that is most associated with design: furniture. An example of the significant changes is the effect of rapid globalisation on the market. If for a long time design has been the preserve of the Europeans, the torch has now been taken over by other continents, namely Asia and North America. It’s an evolution that also runs concurrent with an upsurge in household spending, in which Asia, with a yearly turnover of $88.3bn is taking the lead, followed by Europe and North America, with respective annual figures of $80.1 and $74.9 billion. And all this goes hand in hand with the phenomenal boom in the real estate market and the increasing trend towards cocooning in times of growing uncertainty. A house today no longer serves just as a safe nest and home, but also an office or workplace. It is the Alpha and Omega of our existence. And while until recently design was catalogued as a niche industry, the fact that, for example, fast-food chains have also become design converts, is a sign that nowadays design has become the rule no longer the exception. This goes some way to explaining why the furniture industry, which was once dominated by medium-sized family companies, is rapidly experiencing takeover by the luxury sector and large organisations, who in contrast to the family-based companies have the means for large-scale investment. Design has become big business. We are at the beginning of an irreversible process and as such investment can only bring positive returns on a variety of levels, but there are also benefits for the collectors who clamour for the masterpieces that are becoming increasingly rare.

It is within this context that Brussels has quickly attained the status of a Mecca. Because the birth of design is inextricably linked with the first industrial revolution - which took place at the beginning of the 19th century - the new materials and production techniques that emerged saw Brussels develop as the first industrial capital on the European mainland, and therefore quickly gain a reputation as a capital of design. There remain many witnesses to past glories from art nouveau to art deco. Different from other places, in Brussels design is not considered a new phenomenon. It is tradition itself. It also means that the average Brussels resident has the principles of design spoon-fed to them.

Such a history could also throw light on the extensive number of dealers in vintage design, their exceptional high quality and numerous dedicated collectors. It is therefore only logical that the organisers of artbrussels have decided to open their doors to design - national and international. And with only a limited number of galleries per country admitted, great quality is ensured.