Geraldo de Barros and Lygia Pape. An exhibition of Concrete and Neo-Concrete art by two pioneering abstract artists in 1940s and 1950s Brazil. These exhibitions are the centerpieces of FORMA: BRAZIL, a five-month exploration of the modern and contemporary culture of Brazil at The Americas Society, which will also include lectures and panel discussions exploring the central artistic, philosophical, and literary issues of Brazilian modernity. 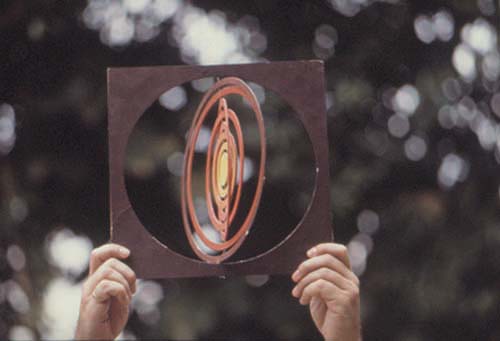 The Americas Society Gallery will be the first in the United States to exhibit works by the pioneering abstract Brazilian artists, Lygia Pape and Geraldo de Barros. A subsequent exhibition will present site-specific installations by two of the most exciting contemporary artists from Brazil, Iran do EspÃ­rito Santo and Rivane Neuenschwander.

These exhibitions are the centerpieces of FORMA: BRAZIL, a five-month exploration of the modern and contemporary culture of Brazil at The Americas Society, which will also include lectures and panel discussions exploring the central artistic, philosophical, and literary issues of Brazilian modernity. Highlights of the series include a bilingual poetry reading by the Brazilian Concrete poet DÃ©cio Pignatari and a conversation between exhibiting artist Lygia Pape and Paulo Herkenhoff, Adjunct Curator, The Museum of Modern Art, New York. See attached calendar for a full listing of programs and participants.

The first exhibition (March 20-May 6) will present the work of two pioneering abstract artists from the early years of Concrete and Neo-Concrete art, a period in the 1940s and 1950s, in which Brazilian artists developed ideas from the European avant-garde in an innovative and unique way. The fotoformas of SÃ£o Paulo Concrete artist Geraldo de Barros (1923-1998) are an early manifestation of a new desire for modernity, expressed through a series of photographs and photograms in which fragments of the city of SÃ£o Paulo are rearranged into abstract compositions. Created between 1947 and 1950, the fotoformas reflect the excitement of SÃ£o Paulo in the middle of the twentieth century.

The abundant critical and art historical attention paid to Lygia Papeâ€™s Rio de Janeiro contemporaries and co-founders of the Neo-Concrete movement, HÃ©lio Oiticica and Lygia Clark, has overshadowed the vital contributions of Lygia Pape. This exhibition will present Papeâ€™s important early Neo-Concrete works such as a video of 'Ballet neoconcreto nÂ°1' and 'Ballet neoconcreto nÂ°2' (Neo-Concrete Ballet No. 1 and Neo-Concrete Ballet No. 2), a choreography for pure geometrical forms set to experimental music, and the 1959-60 books/sculptures The Book of Creation (pictured at left) and The Book of Architecture, which can be manipulated by the viewer. Visitors will be invited to handle a replica of The Book of Architecture. The exhibition will also include her seminal woodblock prints called 'Tecelares' (Weavings).

The second exhibition (May 29-July 29) will consist of site-specific installations by Iran do EspÃ­rito Santo and Rivane Neuenschwander, two of Brazilâ€™s most promising artists. Although both artists work in very contemporary international visual languages, their concerns with issues of temporality and permanence, poetry and illusion, can be traced back to the formal innovations and experimental spirit of the 1940s and 1950s in Brazil.