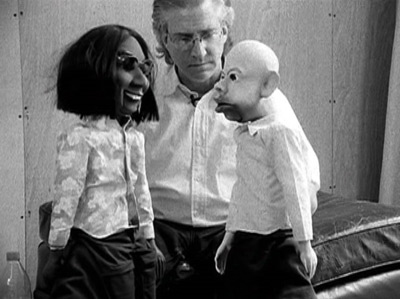 Friedrich Petzel Gallery is pleased to announce an exhibition by artists Phillipe Parreno and Rirkrit Tiravanija. This show will feature a 12 minute long black and white 16 mm film, as well as a group of 5 puppets in the likenesses of Philippe Parreno, Rirkrit Tiravanija, Pierre Hughye, Liam Gillick, and Hans Ulrich Obrist.

The film is based on an occasion on which Parreno and Tiravanija were asked to join a lecture panel convened in 2005 to discuss a new book by Hans Ulrich Obrist entitled "Interviews." In lieu of attending the discussion, the artists sent two puppets along with a ventriloquist to perform a planned dialogue. Similar to past projects the artists have produced involving re-enacted or recorded conversations, this work uses dialogue and language to examine and explore experience, memory, theatricality, and human interaction. In the film, Parreno and Tiravanija's puppets begin their dialogue with a lighthearted, humorous, yet somewhat risque repartee, ironic given the childlike innocence of the character puppets. Their conversation then moves into a much more sophisticated literary analysis focused on Obrist and his book, resulting in a contrast and movement that reflects the transient nature of both animate and inanimate objects. Parreno has said that his puppet acted as a vehicle, "so I could talk through him, and he could talk through me," while Tiravanija has said that his work may intend to "demonstrate how individuals can be active contributors to their own media culture, rather than mere consumers of it." With this collaboration, the artists are pursuing their goals through reinterpreting a critical lecture panel as a piece of art. By applying the Duchamp principal it only becomes a true work of art through the participation of the spectator.

Philippe Parreno and Rirkrit Tiravanija have worked together on numerous occasions in the past, many of which have also included artists Liam Gillick, Pierre Huyghe, and Carston Hoeller. This is the first time the film has been shown in New York.

Through his paintings Dirk Skreber challenges seemingly contradictory ideas in contemporary painting such as abstraction and figuration, color and line, beauty and catastrophe. The content is used as a way to explore formal issues.

This exhibition entitled "CRYSTAL MESS" features paintings of houses and abandoned camping trailers, leaving the viewer's imagination to ascertain what lies beneath. The provocative meaning of the show's title further estranges the viewer, who voyeuristically looks at the house through the eerie perspective of an aerial lens, from any emotional response. The calmness of the paintings in conjunction with the title only hints at the dark stories that lie hauntingly beneath their picture perfect scenery. Through the complete dehumanization of the scenes the mystery of the subject is heightened.

In 2000, Dirk Skreber was awarded the inaugural young artist prize by the Nationalgalerie in Berlin, the most prestigious prize for young artists in Germany. He has exhibited in museums throughout the United States and Europe including the Kunstverein Freiburg and the Kunsthaus Zurich.

The exhibitions will open on Saturday, April 29, with an opening reception from 6-9 pm