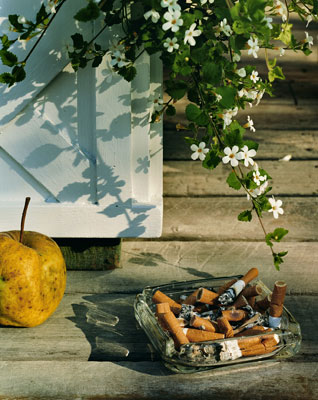 "It's the same image whether it's illustrating a text or has a caption, on the walls or on a bus stop. I like the fact that photography is ubiquitous and polymorphic, that it can be for the specialist or the dilettante or sometimes both at the same time." (Roe Ethridge)

Gagosian Gallery is pleased to present eighteen new photographs by Roe Ethridge. Many of the photographs were taken during Ethridge's extended visit to the west coast in preparation for this exhibition. This is the artist's first solo exhibition in Los Angeles.

In Apple and Cigarettes, more than ever, Ethridge's images emanate from his direct experience of the world. His focus is multiple and restless as he works to capture the vivid and intimate details of his various locales. In doing so, he moves freely among the classic genres of the photographic medium - portrait, landscape, and still life.

This striking series of photographs - which includes the title image of a blighted apple and a full ashtray, a stagy studio portrait of a retired policeman, a rattlesnake poised to strike, a cutting board with fish guts, a babble of hand-painted text advertisements, and a young, auburn-haired woman smoking a pipe - contains visual and thematic relationships that gesture towards the narrative components found in literature and film.

Roe Ethridge was born in 1969 in Miami and received a BFA in Photography at The College of Art in Atlanta, GA. He has exhibited in museums and galleries in the U.S. and Europe, including the ICA, Boston; P.S.1, New York; Carnegie Museum of Art, Pittsburgh, and the Barbican Gallery, London.

A fully illustrated catalogue will accompany the exhibition.

Opening reception for the artist: Thursday, May 25th, 6 - 8pm