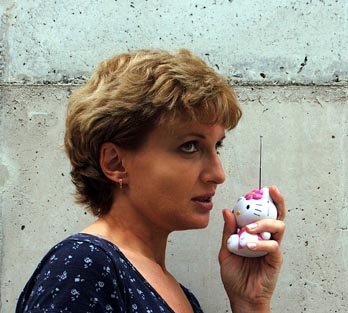 Uruguayan artist born in Montevideo in 1976, Martin Sastre has became one of the most important figures of his generation in the scope of the new Latin American art.
Basing his work on video as a media, this artist has been recognized as the creator of a language of his own. He has been able to conjugate pop and political discourse, making his works a unique exercise of social criticism in tune with smash hits we can all sing to.
The globalized World from the perspective of a Latin American artist - and specially a Uruguayan one- trying to be an active part of the competitive World of International Art is - in the vision of this artist is a World plagued of irony, humor and paradoxes.
As part of his arguments, Martin Sastre has sworn to masturbate Britney Spears with a giant swap in his work "Masturbated Virgin" (5 min. 2001), has fought in a duel of swords with the international art star Mr. Matthew Barney in his work "BOLIVIA 3 Confederation Next "(15 min. 2004) and recently in “Diana: The Rose Conspiracy" (20 min. 2005)he has revealed to the world that Princess Diana of Wales - Lady Di- has been hidden all these years from her enemies in one of the poorest neighborhoods of Montevideo, Uruguay’s capital city.
His work has been shown in the most important Biennials of the World (Havana 2003, Sao Paulo 2004, Venice 2005) and he has also had individual shows in Australia, Spain, England or Brazil. Now Martin Sastre becomes “aurific" for its first individual show in Paris.
The Filles du Calvaire gallery presents "AURA " a new project from this artist based on that mysterious star that surrounds objects or people who soon will be transformed into Icons, objects of cult, Stars... or... Uruguayan artists.