We Hope You Choke 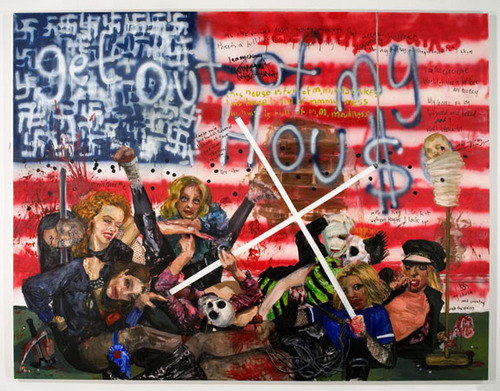 We Hope You Choke

Team Gallery will present an exhibition of new paintings by Dawn Mellor from the 18th of May through the 24th of June 2006. The gallery is located at 527 West 26th Street, between Tenth and Eleventh Avenues, on the ground floor. This is Team's last show at this address.

Dawn Mellor has been exhibiting paintings of celebrities for the past ten years. Rather than being the work's subject matter, however, the celebrities are the artist's tools -- implements used in a war waged against the culture industries and their control over physical and psychological life.

Mellor's art is a contentious one - her work exists in a state of perpetual argumentation. She seems less concerned with stating a definitive position than with destabilizing the status quos of female representation through an anarchic address to viewer expectations. This project is accomplished through numerous strategies of dissonance -- through her deployment of the crass and the pornographic, by enlisting such antiquated punk signifiers as bondage gear and swastikas, and by conflating the crude with the sophisticated. The celebrities in her paintings are sometimes recognizable, sometimes indecipherable, and Mellor's skills at rendering alternate between the accomplished and the muddled. She pollutes these public figures with her own personal positions while frequently ''damaging'' her paintings through the use of scrawled texts, lipstick traces, or her own footprints. Mellor enlists the aid of a disrupted painterly surface which she creates by utilizing radically conflicting painting styles across the same picture plane.

A nagging question hangs over Mellor's practice: is this a mature or appropriate response to the problems at hand? An answer in a roundabout way might be provided by a return to the initial moment of the punk formation: was punk -- with its churlish, childish attitude, in its very ''badness'' -- an inappropriate response to the staggering unemployment and race riots that plagued British cities at the time? Another apt question might be: does a painter's practice need to be defended as mature and responsible? Does that make their accomplishments more laudable?

This is Mellor's second solo show with Team. She is represented in London by the Victoria Miro Gallery, and has also had recurring solo shows in Brussels with Galerie Drantmann and in Venice with Il Capricornio. Her work was included in Remix at the Tate Liverpool and in the 2005 Prague Biennial Expanded Painting.

NOTE: After ten years in West Chelsea, Team is relocating to SoHo. We will reopen in late September at 83 Grand Street in a 4,400 square foot space on the ground floor.

For further information and/or photographs please call the gallery at 212.279.9219. Gallery hours are Tuesday through Saturday, 10am to 6pm.