Heidi Stern exhibits two installations and several oil paintings on wood. Her installations, titled "The Globus Syndrome" and "the Bridge" resemble the aesthetics of tableaux vivants. In addition to the installations Stern represents several paintings of young men, looking through openings and windows, forced to participate in the spectacles, contemplating upon the events. 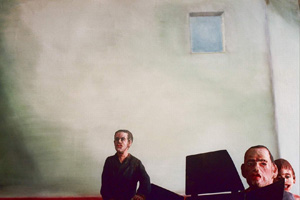 In her coming show at the galerie davide gallo, Heidi Stern exhibits two installations and several oil paintings on wood. Stern's installations, titled "The Globus Syndrome" and "the Bridge" resemble the aesthetics of tableaux vivants but unlike the tableaux which populated real people posing as figures in an art scene, she stages imaginary figures in real and symbolic situations. Indeed, Stern directs the scenes of her installations as in a mediaeval moral play but the problems which in the past occupied the imagination of the middle age, though relevant and touching issues of good and evil as they are, are treated through a contemporary twist. Both installations deal with the theme of public execution and its uncanny relation with the media. Stern analyzes the topic through its appearances in the history of art and builds parallels with the ways artists of the past treated the subject. At the same time she also emphasizes the new context in which such executions are done today.

"The Bridge" is an installation referring and paraphrasing Albrecht Altdorfer's famous work The Martyrdom of St. Florian, who was thrown into the Enns river with a stone around his neck in 304 AD, his crime being a Christian. In Altdorfer's work the people surrounding the saint convey no violence. They seem to almost kindly ask him to jump to his death and it is this discrepancy between their manners and their goal which evokes the horror of the scene. Stern takes the topic and narrates it into a contemporary execution keeping both the location of the bridge and the peaceful relation between victim and hangmen.

The second installation, "The Globus Syndrome" deals also with the subject of a public execution. This act, which seems to belong to other times, got a revival where fundamentalism takes place and it is connected with the phenomena of terrorism. The Globus Syndrome is a name given to a clinical condition in which the patient complains of a feeling of a lump in the throat in the absence of any physical signs. It describe well the reaction you get upon witnessing such scenes in the media, but points also towards the obscenity of the media itself in taking this material as a kind of twisted entertainment. As in the work of Altdorfer no violence is conveyed in those execution scenes. They almost have an aura of everyday process, and it is this treatment that enhances its horrors. Stern does not tell us why her victims are executed but in both installations their hangmen are many, including as in the Globus Syndrome the light technician of the camera team.

In addition to the installations Stern represents several paintings of young men, looking through openings and windows, forced to participate in the spectacles, contemplating upon the events. Relatively small in their dimensions, Heidi Stern builds through the installations a morbid cosmos in oil color, clay, canvas, wood and metal which serves as a reflection about the realities of our time, and the complicated misalliance between politic and the media.