The age of a different reaction

On display recent works by: Ariane Littman & Reuven Zahavi, Benjamin Reich, Jan Tichy, Nir Evron and Rona Jefman. All these artist have been able to transform their personal condition and their own connected perception of the sociopolitical phenomena in a wider sphere and - to use a common word - in a "global" form. 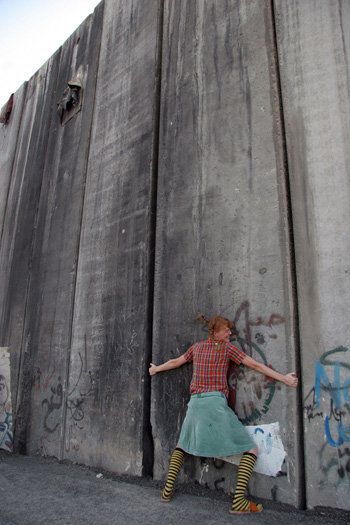 On Friday January 16th 2009, galerie davide gallo has the pleasure to present the exhibition 'The Age of a Different Re-Action', a project that includes 5 artists and 7 works, two of which are the result of specific cooperation. This show was scheduled long time ago, now, when the Middle East situation is so difficult, it wants to present the new Israeli art scene and its capacity to tell the facts from a different perspective. This show gives me the chance to send a sincere message of peace to the Middle East.

I think that Ariane Littman & Reuven Zahavi, Benjamin Reich, Jan Tichy, Nir Evron and Rona Jefman are artists, who in such an antique society like Europe, you would dare to define as 'counterculture' figures, but in a relatively recent world like Israel they don't own such a strong conscience to be considered 'counterculture' at all. All these artists have made of their own art not only a mere esthetical experience but a real mean for social communication. Furthermore they have been able to transform their personal condition and their own connected perception of the sociopolitical phenomena in a wider sphere and - to use a common word - in a 'global' form.

Please find below excepts from the artists description's of the works.

Ariane Littman & Reuven Zahavi, 'Kissufim Labyrinth', 2008, 3D video animation, 6-06 min. 'It is part of an ongoing project started in 2006 tackling the blurring of the senses and consequently the distortion of reality. A condition which in the long term leaves the individual vulnerable and powerless without a feeling of perspective, prisoner between security concerns and occupation, peace and war declarations but more acutely, lost in a physical and metaphysical existential labyrinth with no beginning and no end.' (Littman)
Littman & Zahavi, live and work in Jerusalem, a place that has strongly influenced their art. 'The fact that I have been living and working in Jerusalem has certainly affected the primary visual, political and cultural content my work leans on... As a city that aspires to expand, mark or create boundaries, Jerusalem offers a charged challenge to art making... This is an urban reality of national and religious conflicts...' (Zahavi)

Benjamin Reich, 'Friday Bath', 2008, video slide show, 4-52 min. 2008, Benjamin Reich's videos are dealing with deep feelings of friendship, sometimes homosexuality, among adolescents in the Israeli ultra orthodox communities. His recent video work 'Friday Bath' was shooted in Lifta, during the bath time, a sacred-considered moment by the orthodox culture. There are many natural springs around Jerusalem used for religious purposes. These places hide some kind of magic and pagan atmosphere. In the orthodox culture every single human action has to be dedicated to God. In Reich's work this deep and intimate friendship feeling is a further gift to God. 'Immersion... is a commandment which requires immersing the entire body under water. The immersed body has to be nude and any separation between it and the water is prohibited. During the immersion, while the supply of oxygen is interrupted, we are at the gate between life and death and at that moment we instinctively recognize our creator and communicate with Him.' (Reich)

Jan Tichy, 'Installation N¡6 - Tubes', Video Installation 10 min, tv-monitor, paper objects, sound. Through his work Jan Tichy faces the relationship between light and shadow and how these two elements recreate and redefine and sometimes disclose, spaces and forms. Tichy's works usually contain objects simply made from white paper and presented in darkness. The objects are illuminated by a video projection, using mostly white time based shapes. In the work 'installation no. 6 (tubes)' about 200 paper objects, open tubes of various dimensions, stand on a screen of a television monitor. The black and white abstract animation illuminates the tubes and creates a movement inside the sculpture. The video is synchronized with sound that comes out through the built in speakers in the monitor. The sound is a recording of the electricity charge produced by the monitor itself while playing the video. Jan Tichy's spaces live in a suspended dimension, the eternal agony of an unstable and continuously threatened place.

Nir Evron, 'In Virgin Land', 2008, video, 15-52 min For this work the artist made a research and found a list of names, some well known like Gustave Flaubert or Hermann Melville, some not so popular who have all in common a journey to Middle East told in a diary. A background voice reads this text '...comprised of fragments taken from 10 different accounts, written by travellers, and visitors to the land through the ages. They are pilgrims, writers, scientists, military men. The texts are edited in a way that they suggest one's journey through space and time...producing a strange feeling of being out of time.' (Evron)
Nir Evorn's filmed places are virgin, not touched by man yet. The land is the main character of this video. The artist aims to tell the different stories that this part of the world has seen through the years: '... a land that is the heart of the conflict. This land appears empty of any human presence only to expose the multitude of approaches and its concerns.'

Rona Yefman, 'Pippi Longstoking', 2008, video, 3-05 min. What would happen if one day the last female heroine, who is not scared by anything, the strongest woman in the world, arrived in Israel and found the West Bank wall to be as an obstacle for her? She would probably try to remove it, not considering the meaning and consequences of her action. And this is what happens in the video Pippi Longstoking by Rona Yefman, a work between the video and performance concept, made together with the Danish artist Tanja Schlander. In her work, Rona Yefman tells about the esoteric and the unseen, she is strongly interested in the distance between what we are and what we would like to be. 'Using the fantasy of fiction to confront the reality, I want to promote the idea that change is always in a constant dialogue with historical precedents and physical boundaries, but that in essence it is always the will of thee individual that contributes to a positive reformation of any political conflict.' (Yefman)