Formel:Verein. Her works (in sculpture, sound, installation, theatre and performance) are permeated conceptually and methodologically by a very specific and often radical use of emblems and symmetry, and they reflect on everyday forms of society and socialization. 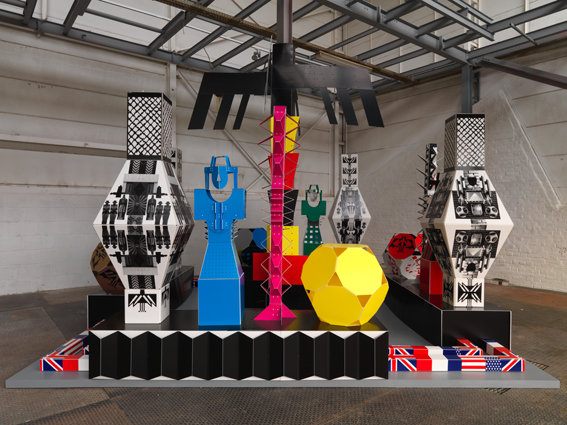 Galerie Barbara Weiss is pleased to present our first solo show by Suse Weber, entitled /Formel:Verein/. Weber was born in 1970 in Leipzig, and works in sculpture, sound, installation, theatre and performance. Her works are permeated conceptually and methodologically by a very specific and often radical use of emblems and symmetry, and they reflect on everyday forms of society and socialization. On the one hand they present a cultural critique of the social status quo in certain areas, while they also raise questions pertaining to belonging, identity, and self-image. When creating her works, Suse Weber uses a combination of industrially produced raw materials and materials she has made herself. Her perfect aesthetics make the latter then also resemble industrial mass production.

In the exhibition /Formel:Verein/ Weber shows a sculptural ensemble that she created during her scholarship period in Mönchengladbach in 2007, and first showed at the MMIII Kunstverein Mönchengaldbach. In preparing the work, she undertook her own “research” in the world of Mönchengaldbach clubs and societies – in a town which is renowned for its unusually high number of club members. The artist was interested in three claims: firstly that, historically speaking, a club is a modern phenomenon, a product of the Enlightenment process that liberated the individual from traditional ties and constraints; secondly that, politically speaking, clubs were reinvented after 1945 and became the smallest democratic institutions in the new Federal Republic of Germany; and thirdly that, economically speaking, clubs are ideal networks for foreign investors. Suse Weber examined the emblems of sports’ clubs, and the uniforms and rituals of gun clubs and fraternities, testing their significance and legibility in the present. A selection of her analyses of coats of arms and emblems, done in the form of sketches and collages, can be seen in the exhibition. Instead of transposing forms and colours of club heraldry directly, the artist created own iconic images anew – an attempt on an artistic level to produce a vocabulary that must do without a generally valid consensus and that yet still transports information.

/Formel:Verein/ is made up of four symbolic components of various colours, which Suse Weber calls the City, the Individual, Hierarchy, and the Occasion. The City presents itself as a static, monumental construction; the Individual as a human representative constrained like a soldier; Hierarchy as an upward-striving column whose number of spikes could correspond with the stripes and stars on uniforms; and the Occasion as a ball, an object with a high degree of freedom of movement, possibly alluding to sports’ clubs as well as to the ritual of shooting the eagle in a gun club. The combination of differing codes also extends to the colour semantics, which work with various flag colours, and also with the greatest possible generalization of the industrial colours cyan, magenta, and yellow, or with the symbolism of bronze, silver, and gold. The irony of using plastic to produce precious-metal sculptures is underscored by the sculptures’ obviously homemade quality. The PVC hollow-chamber plates are elaborately decorated by silk screening and individually attached to each other with wire ties; the overall effect of their unserious materiality is to preclude any all-too-didactic treatment of the theme. And the stereotypicality evoked by the material’s unlimited mobility is more reminiscent of a monumental erector set than of a real monument. But the explosiveness of her work displays itself precisely at this point. The distance that Suse Weber creates with her standoffish images enables reflection – in model fashion, so to speak – on traditions and power. As a contemporary possibility for iconography, Weber’s emblematic sculptures may not be able to explain, but they can at least question the mechanisms of socialization and cooptation – and thereby and lastingly disturb the viewer again and again (see Magdalena Holzhey, catalogue /Formel:Verein/, Mönchengladbach).

In another group of works on show, a series of torsi, made following an identical pattern like a knight’s coat of armour, Suse Weber uses and transforms a wide variety of materials, including biographical photographs of earlier works, graphic designs, and sections of silkscreen prints of her present work.