This provocative and stimulating installation features a miniaturized mountain city aglow in a surreal aura of light. Wang seeks to question the relationship between modern cities in China, the continuing project of Westernized urbanization and, hence, the subsequent demolition of Chinese tradition. 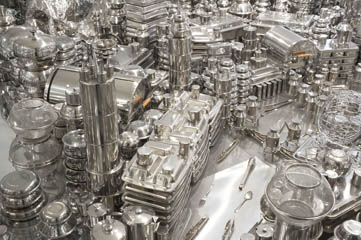 In Urban Landscape, Zhan Wang takes everyday objects and assembles them in a way that de-familiarizes them, creating an effect that stuns the senses. The fabricated metropolis is flanked by Wang¹s famous stainless steel rock sculptures and illuminated from above, evoking a surreal, mesmerizing glow. Although the effects are dazzling, the statement is somber. Disenchanted with the relentless urban demolition of China¹s cities, Wang seeks to conjure the memories of what has been destroyed in China and what these cities perhaps still stand to lose.

As someone who has lived all his life in Beijing, I have seen this regime demolishing non-stop. They don¹t let you choose a place and make it special and meaningful; sooner or later, they will take it down. By trying to reach a level of western-oriented modernization, we are destroying the continuity of our own tradition.

Zhan Wang attended Beijing Industrial Arts College from 1978­1981 and also the Central Academy of Fine Arts from 1983­1988. He currently works as a Professor of Sculpture at the Central Academy of Fine Arts in Beijing while also creating and exhibiting new works. He is perhaps most famous for his stainless steel rock sculptures and his pieces are represented in art collections all over the world. Zhan Wang has participated in numerous exhibitions, the most recent of which were Transience: Chinese Experimental Art at the End of the Twentieth Century at the Smart Museum of Art, University of Chicago (1999) and Universal Experience: Art, Life and the Tourist¹s Eye at the MCA in Chicago (2005).

A gallery talk on this exhibition, given by WCMA¹s director, Lisa Corrin, is scheduled for June 27 at 2:00 pm. WCMA¹s Summer Party will be held on July 15 from 5:00 to 6:30 pm at the museum. The party will celebrate the museum¹s summer exhibitions, including: Jackson Pollock at Williams College: A Tribute to Kirk Varnedoe ¹67; Jacqueline Humphries: Seven Sisters; Zhan Wang: Urban Landscape; Mergers and Acquisitions, and Rhoda Holmes Nicholls. These events are free and open to the public.

Williams College Museum of Art
15 Lawrence Hall Drive - Williamstown
Opening hours: Tuesday through Saturday, from 10 a.m. to 5 p.m., and on Sunday from 1 to 5 p.m.