Ist das Leben nicht schon? The second chapter in the year-long exhibition project. It will combine some of his most impressive early paintings with several new works produced during the last year, as well as four films. The sources for his figurative painting include real places and personal imagery, as well as images created by the media, popular culture and even urban myths. 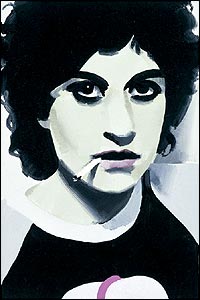 The second chapter in the year-long exhibition project „Ist das Leben nicht schon?“ at the Frankfurter Kunstverein in 2006 will be a show with the Polish artist Wilhelm Sasnal (*1972). It will combine some of his most impressive early paintings with several new works produced during the last year, as well as four films. The exhibition is the result of a collaboration with the Van Abbemuseum in Eindhoven and represents the most comprehensive solo presentation of Sasnal’s works in Germany.

The paintings of Sasnal offer the viewer the possibility to study the relationship between reality and visual cliche's. In his works he interprets the cultural and political changes that Poland has undergone since the 1960s. He investigates the collective imagination of his own generation living in a ‘new’ society caught in its own past, but nonetheless looking to the future.

The sources for his figurative painting include real places and personal imagery, as well as images created by the media, popular culture and even urban myths. The reduced formal vocabulary and emotional distance of his paintings work to level the used images, letting only the title of the work disclose its personal content. An example is his two of his paintings depicting smoking young women, “Girl Smoking (Anka)" (2001) and “Girl Smoking (Peaches)" (2001).

The paintings themselves contain no indication of the painter’s relation with his image sources; both are cool images of young women. Only through the title the beholder is able to see that one painting is of his wife, Anka, and the other is taken from the mass media, namely the pop singer Peaches, reproduced from a record cover. This emotional indifference towards the image material can be read as a response to the overload of emotion pouring out from the popular mass media every day.

Together with the large selection of canvasses, the exhibition will present four new films by Sasnal: “Marfa" (2005), “Nowa Huta" (2005), “Brazil" (2005) and “River" (2006). The films can be seen as a continuation of the interests he works with in his paintings. The four films have been produced from footage made in Krakow and during his travels last year in the USA and Brazil. They all revolve around his interest in pop music and a fascination for the myths that are created around certain places and countries.

“Marfa" and “River" are filmed in the USA, and both deal with the idea of “America". “Marfa" is named after the town in Texas, which is known for Donald Judd’s collection and museum, but the film has no mention of this mythical art historical presence. Using everyone Sasnal know in the town, including its only rock band, Spic, the film deals with the North American fascination for cars, showing a kind of performance taking place between the people, their cars and the Texan desert.

The film “River" is made over a book about the Mississippi River found by Sasnal, who asked various rock bands to make music to its different chapters. Thus the film deals with two central North American myths, the ‘epic’ Mississippi River and the dream of popular culture.

The footage for “Brazil" is made in Brasilia, the quintessential modern city built by the architect Oscar Niemayer in the 1950s. The city’s grand buildings represent a high point of modernism, but also of social control. Between these buildings, surrounded by water and gardens, what could look like a student revolt, but could also be an uncontrolled rock concert audience can be seen.

Soon the police enter to repress the tumult and the image shifts from colour to black and white, creating insecurity as to whether the footage is historical or contemporary. Suddenly images from the famous beach in Rio, Ipanema, appear. The film forms a trip through a country where modernity played a big role, but also where music, such as the Tropicalia movement, activated the population during the dictatorship.

“Nowa Huta" is filmed in the satellite city in Krakow, Nowa Huta, which was intended to be a model city of socialist urban planning in Poland. Housing more than 250.000 inhabitants, the city was founded in 1949 for the working class. The buildings and street life play a major role in this film, which combines these images with pages from a script or diary describing the place, like the intertitles in a silent film. The feel of the 16 mm form of the film adds to the atmosphere of an emotional account of this place that was founded on a myth born in the socialist imagination.

Wilhelm Sasnal was born in 1972 in Tarnow in Poland. He studied at the academy of fine arts in Krakow, and he now lives in Krakow and Paris. His works are represented in several important international collections, such as the Saatchi Collection and the Centre Pompidou, and he has participated in exhibitions worldwide, latest having a solo show in the Van Abbemuseum in The Netherlands.