He was born and grew up in rural Essex. Living and working in London the artist’s practice has largely dealt with metropolitan themes. The Charms of Lincolnshire allows Perry the possibility to think and create work about the countryside. This is not a historical exhibition about Lincolnshire. 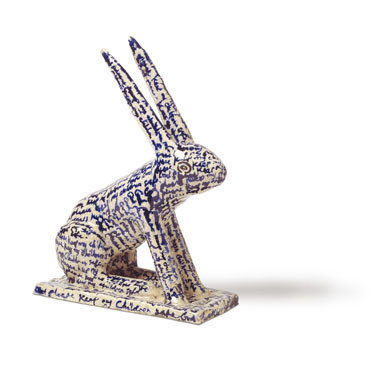 The Charms of Lincolnshire

Victoria Miro Gallery presents The Charms of Lincolnshire by Grayson Perry. This unique exhibition weaves a narrative three-dimensional poem between new works by Perry and historical arte facts selected by the artist from the museums of Lincolnshire.

Grayson Perry was born and grew up in rural Essex. Living and working in London the artist’s practice has largely dealt with metropolitan themes. The Charms of Lincolnshire allows Perry the possibility to think and create work about the countryside. This is not a historical exhibition about Lincolnshire. It focuses on the Victorian era and themes that have a strong emotional charge for the artist such as death, childhood, religion, folk art, hunting and the feminine. From thousands of items in the collections Perry has selected categories of objects around each theme and in response to them has created new works, including pots, ceramics, embroidery, photography and for the first time pieces in cast iron.

“My initial idea was to focus these themes around an unknown artist, a mentally ill (Victorian) farmer’s wife driven insane by the loss of her children. Her ghost and those of the children haunt the choices and works I have made for the show."

The centre-piece of the exhibition is a hearse dating from 1880, which inspired the artist to create a cast iron child’s coffin entitled Angel of the South. He describes it as both a non-triumphal monument to the countless victims of empire building in the Victorian age and the north of England’s technological dominance. The coffin bears images that relate to medieval cathedrals and Benin Bronzes from West Africa - part of the developing world - “the south",
where today premature death is still pre-dominant amongst children.

The title for the exhibition The Charms of Lincolnshire invokes a bucolic cliche' of National Trust England (Perry has even designed the ubiquitous souvenir tea towel), whilst also suggesting that the items exhibited are talismans of some forgotten, arcane, rural voodoo.

“The biscuit tin idyll of cosy village Britain is luckily in the past, for it was a candlelit back-breaking, sexist, tubercular child-death hell. The ghosts of long-ago children flicker in the dead-eyed familiars of wax, porcelain and wooden dolls I have chosen and in the stitches of the samplers worked by young pious hands".

The Charms of Lincolnshire was first exhibited at The Collection, Lincoln in February 2006. The Collection is a critically acclaimed, £12 million new museum in Lincoln. Designed by Panter Hudspith Architects, it opened in 2005.

The exhibition is presented in association with the Museums of Lincoln and the Arts Council.