An Exchange Project with the Art Academy Tirana. On display are works by more than twenty students and graduates of the Tirana Art Academy as well as a selection of current paintings by Edi Hila. Their attention is directed towards the profound transformation of Albanian society at the beginning of the twenty-first century. 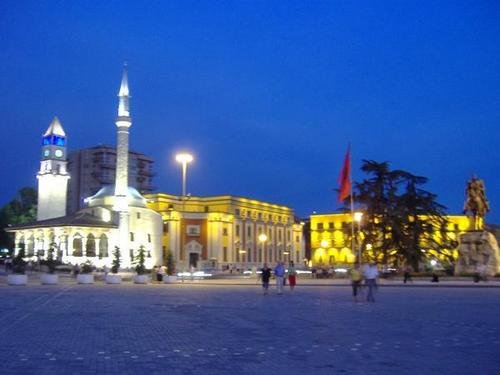 An Exchange Project with the Art Academy Tirana

A Project of Irgin Sena, Tirana, and Mischa Kuball, Dusseldorf/Karlsruhe

The initiative “Tirana-Book-Transfer" was established within the scope of the project Tirana Transfer by the art student Irgin Sena and the concept artist Mischa Kuball in reaction to an appraisal of the current situation in Tirana during May 2006.

Professor Edi Hila and his student Irgin Sena lent their local support for the Tirana-Book-Transfer. The future library of art books will be set up and cared for right in the academy itself, so that the donated books are accessible as resources.

Renowned German art publishers spontaneously demonstrated their enthusiasm for making multi-lingual publications available at no cost. They deserve our heartfelt thanks!

The library is intended to grow further in the future. During the exhibition Tirana Transfer, books are being collected in a provisional bookcase of the Badischer Kunstverein.

The young generation of Albanian artists is featured in the exhibition Tirana Transfer which is being presented by the Badischer Kunstverein from July 15 to September 3 on all three exhibition levels. On display are works by more than twenty students and graduates of the Tirana Art Academy as well as a selection of current paintings by Edi Hila.

After the political isolation of the country had deprived generations of Albanian artists of the possibility of presenting their works in public, the young artists of today are confronting the reality of their lives with self-assurance and seeking an exchange of ideas on the international level. Their works are marked by a realism that is both authentic and poetical. Their attention is directed towards the profound transformation of Albanian society at the beginning of the twenty-first century.

Their teacher Edi Hila, born in 1944, himself studied at the Art Academy Tirana during the 1960s. In the early 1970s he was condemned by the Hodscha regime - along with many of his colleagues - to a labor camp. During the following twenty years his style of painting, with its strong metaphysical overtones, achieved absolutely no public resonance. After the opening of the country in 1991 and in contact with the future generation of artists, he has been successful in seizing hold of the present situation of Albania in painted images. His motifs are seemingly paradoxical buildings oscillating between relic and draft, figurative scenes in urban or interior spaces characterized by temporal ruptures.

Albania is not only the poorest country in Europe. Even today it is characterized by a few media-encouraged cliche's as unknown territory on the geographical map. For this reason, the project Tirana Transfer is initiating a process of exchange and evaluation in both directions: before Edi Hila and his students come to Karlsruhe for ten days in July, twenty students from the School of Design in Karlsruhe (with Mischa Kuball) and the Institute of Fine Arts (with Prof. Stephen Craig, Erik Gongrich, Stephan Baumann and Markus Graf) at the Architecture Department of Karlsruhe University traveled to Tirana in May.

There they participated along with the Albanian students in joint workshops which focused on the urban and individual reality in Tirana. The results of these workshops complement the exhibition in the Badischer Kunstverein and will be accompanied on three weekends by discussions, lectures and film programs concerning Albania and its artistic scene.

The exchange Karlsruhe - Tirana is taking place in the framework of the German-wide project CROSSKICK - European Colleges of Art Hosted by German Art Associations. From May 2006 until the autumn of 2007, thirteen art associations in Germany are presenting thirty European colleges of art. CROSSKICK was initiated by the Arbeitsgemeinschaft deutscher Kunstvereine (AdKV, Working Community of German Art Associations) and is supported by the Kulturstiftung des Bundes (Federal Cultural Foundation).