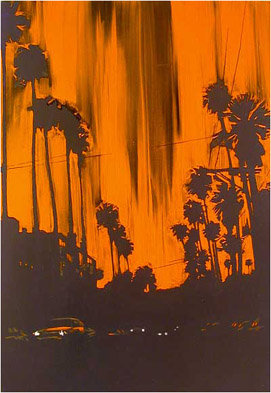 Fumiko Amano. Born in Tokyo, she began her formal arts training in Wisconsin completing a B.A. in Art Design - Painting/Printmaking then traveling throughout South and North America before settling in Los Angeles. Here, Fumiko continued her artistic journey creating fashion and unique installations. She continues to work on several series of exquisite paintings inspired by architecture, design, music and all her life's experiences. As the "Culture Vulture" of Los Angeles and a beacon of the downtown scene, Fumiko nurtures her own creativity by providing opportunity and creating awareness of all things culturally significant.

Ela Boyd. "I carry with me a handful of moments. Transformative moments where I felt the veil that exists between myself, and true awareness had been lifted. These experiences offered a chance to transcend the bind of the human condition. This translucent veil must be my own perception- my cognitive ability to interpret time and space. In my work, I use light as a medium to address this dynamic of ephemeral phenomena." - E.B.

Jay Brockman. "Jay Brockman's work lies within the great tradition of landscape painting. He does, however, give it a decidedly 21st century twist with its contemporary urban LA landscape viewed from a car, which is how one views landscapes in LA. Jay's work captures a particular feel of LA the way Hockney or Ruscha does." - Andy Moses.

Jay is originally from Florida where he studied fine art at the Ringling School of Art and Design. Following graduation in 1996, he spent numerous years painting and creating various works in New York before settling in Los Angeles.

York Chang. My work deals with the juxtaposition of visually marginalized "throwaway" images with the iconic imagery of mass media. I look for spontaneity and irony in these images, particular visual cues from which we implicitly read a certain unchoreographed yet thoughtful and genuine quality that is at the heart of what is most beautiful in life and art.

Morgan Craig has taken upon himself the demanding task of teaching the subject of art to the students at Roberto Clemente Middle School, a Title 1 school, in North Philadelphia. He received his BFA with teacher's certification from Tyler School of Art, and his MFA from University of the Arts in Philadelphia, PA.

When not hauling his large canvasses throughout the eastern United States for collectors and curators, Morgan rests his head in Philadelphia often dreaming, thinking.

Laurent Dareau was trained in Paris, France, first as an optometrist. He soon realized this was not for him. He then began his professional pursuit of his life-long dream. He trained for three years at the National School of Fine Art in Lyon, France, and then another four years at the National Superior School of Decorative Arts in Paris. There he learned much about painting and more, perhaps about life and himself. Laurent has a strong exhibition history in France and is represented in London and throughout Europe. His wife's career as a primary-school teacher brought Laurent and his two children to Los Angeles last year.

EVE. Plunging headlong into life, the young artist virtually invented Himself during his homeless travels across Europe. Conspicuous not only in his remarkable talent for painting but also in the eccentricity of his dress and the wildness of his behavior, life came to symbolize the freewheeling spirit of the rebel artist. "We are a breed, the artist, I don't do anything that hasn't been done as an artist I'm channeling the breath of our time." EVE

Thomas Frontini's oil paintings are based on the premise that no matter how we may change and advance technologically, human consciousness is stuck in instinctual traps. Since this sad fact dooms man to a never-ending cycle of repeating past mistakes, Frontini translates dreamlike visions into parables of warning.

Although his fantasies evoke a surface irrationality, they often stem from reality-based current events. Add inspiration from ancient myths and art historical traditions, and the layers of meaning are difficult to digest in one gulp. They percolate slowly through a mixture of symbolist allegory, ancient mythology and surrealist landscapes.
- Eleanor Welles

Thomas is originally from Ontario, Canada. He later earned his M.F.A. in painting at the Cleveland Institute of Art. Thomas, his wife and four children live in Cleveland Hts., Ohio.

Marcus Antonius Jansen is a painter who went from a being soldier in the Gulf War to a leader in Modern Urban-Expressionism. Jansen himself is an unusual combination of New York City and Germany where he grew up. Jansen is billingual and speaks German and English fluently. Thus, it is not very suprising that his work is influenced by an early generation of German expressionism as well as by the 1950s New York movement of abstract expressionism, using urban cityscapes as a platform for his own language, thoughts and vision. Jansen also incorporates typical Graffiti elements in most of his paintings. "Art is Life. What better way to show it than in what we see every day. Some painters remove their imperfections in their work. I use them. It is through imperfections that we learn" Jansen says.

Marcus, his wife and newborn son reside in southwest Florida.

Max Micelli - was born in Dayton, Ohio and grew up in Redlands, California. He received his BFA with Distinction from Art Center College of Design in Pasadena and has participated in numerous group and solo exhibitions across the country. Locally, his paintings have been seen at the Santa Monica Museum of Art, the Broken Wrist Project artists/writers collective, La Luz de Jesus, Frden Gallery, the Art Center Wind Tunnel and the annual Fresh Start benefit.

He has also had sell-out shows at LA's Gallery 825. In addition to fine art, Max has worked as a freelance illustrator, commercial designer, Art Director and visual development artist for many feature films and Emmy-award winning animated TV shows.

Max lives in the historic West Adams district of Los Angeles with his wife Andrea and their two dogs, Myrtle and Oscar.

Andres Montoya - The act of creation is a daily necessity for me, it has become a language, an elixir that nurtures and motivates me to paint. In this recent body of work I have delved into the deep crevasses of my experience, memories, dreams. Emotions such as love, melancholy, loneliness are prevalent throughout, and embodied in the figurative as well as the landscape. My goal in this series of paintings is to create a psychological and esthetical bridge where all of us can look and hopefully connect. - A.M.

Miguel Osuna - Born in Mazatln, Mexico, Miguel lived in that port city until the age of 17. He had his first exhibit in Mazatln, Mexico, a collection of 35 beach-inspired watercolors. In the mid-eighties, he moved to California. He has presented exhibitions in Los Angeles, San Francisco, Ventura, and recently participated in an international exhibit in Berlin, Germany. His work can be seen in galleries in California, Florida, Washington DC and Paris. In Mexico, his work is displayed at the Elina Chauvet Gallery, in the historic downtown of Mazatln.

Bryan Ricci - "In my paintings, the worlds surrounding the spotlights display various images from the natural world. These are rendered as a blurred scene or as abstract, simplified shapes, tones, and patterns, as one might view them through perceptions shaped and altered by our fast-paced technological society in which nature has become virtually obsolete. These abstracted, altered visions of our world are how I imagine humans in our society acknowledge, or fail to acknowledge, the natural world. We see only a version of what exists, a landscape glanced at through a car window while speeding past, or surveyed through weary, indifferent eyes." B.R.

Bryan has enjoyed a quality, consistent exhibition schedule since moving to Los Angeles after graduating with his BFA from Purchase College School of Art and Design, SUNY in 2000.

Vonn Cummings Sumner grew up in Northern California, the son of a picture framer in a family of artists. He attended the University of California at Davis, earning both a bachelor's degree in art and an MFA in painting. While at Davis he worked closely with Wayne Thiebaud, Mike Henderson, and David Hollowell, among others.

On one level these paintings are an attempt to bring together my love of color field painting with my need to draw and build forms in a fictional space. I want to couple the emotive possibilities of the one with the felt experience of the other. While the final products are oil paintings, there is an element of performance in my process: dressing up in costumes, staging photo shoots, using images of actors and performers. I have begun to view a painting as a stage where mini-operas or film stills can exist. I am always trying to find the area of greatest artistic freedom, while still knowing that freedom and creativity may only be possible within a system of rules. - V.S.

David Cambell Wilson began formal art training through the Pennsylvania Academy of the Fine Arts at the age of twelve and later graduated with honors from Syracuse University. Combining his formidable painting talent with an innate ability to perceive and evoke emotional states, he takes and transforms these into an intricate and playful visual theater. With a range of influences spanning DaVinci to Dali and Egan Schiele to Alex Gray, the balance of delicate brushwork and bold imagery make his work soothing and striking, challenging the audience to enter and ignite their imagination. His models continue to be people he finds in urban art communities, predominantly fellow artists, performers, poets and musicians. They are people that understand that to pose for him is to take part an historical event - bringing the most creative talents of today into the representation of this culture for tomorrow.