We All Laughed at Christopher Columbus

Roderick Buchanan, Jeremiah Day, Runo Lagomarsino, Ola Pehrson, Amalia Pica and Florian Wust. Like an accidental slip of the tongue the text appears as a projection on a tiny billboard that takes center stage while the other works, including Ola Pehrson’s exquisitely hand -constructed models and pseudo documentary that make up Hunt for the Unabomber, revolve around it. 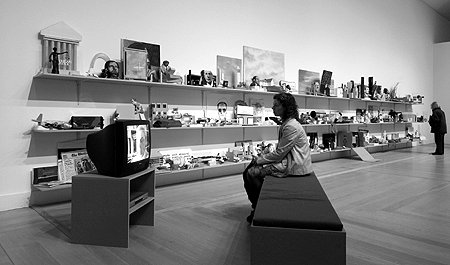 Much artistic and curatorial practice today aims at exploring the truthfulness of historical representation, or the problematic dialectic between collective memory and factual source. Of late there has been a great deal of attention on artistic practice that focuses on reconstructions of historical events - from reenactments to documentary videos, the aim is often to question, investigate or reconsider social attitudes of interpretation. Opposed to these tendencies the group exhibition We All Laughed at Christopher Columbus deals primarily with six artists’ subjective, artistic interpretations of specific historical events.

The significance of the events explored is already determined in collective, internationally distributed history, and although the subjects are not related, or consequentially linked in history in any acknowledged way, they do suggest points of allusion by way of similar artistic approaches and attitudes. This is most evident in the way the selected artists embrace the fictive within the incident, without being compromised by feelings of responsibility to accuracy, thus leaving space for the audience to interpret their own response to each work and construe hypothetical, historical associations.

The title of the show is borrowed from the work of Runo Lagomarsino. Like an accidental slip of the tongue the text appears as a projection on a tiny billboard that takes center stage while the other works, including Ola Pehrson’s exquisitely hand-constructed models and pseudo documentary that make up Hunt for the Unabomber, revolve around it.

In addition a performance by Jeremiah Day will take place after the opening of the show, at SMBA itself on July 21, starting at 10.30pm.

The exhibition is accompanied by the SMBA Newsletter, which features contributions by the curators. We all laughed at Christopher Columbus is generously supported by IASPIS and the Moderna Museet, Stockholm.

Roderick Buchanan, b. 1965, Glasgow, Scotland. Lives and works in Glasgow. He has exhibited extensively throughout Europe and the USA with recent solo exhibitions at the Camden Art Centre in London; Addison Gallery, Andover, Massachusetts, USA and a presentation in the 2004 Indian Triennial, Delhi, India. In 2000 Buchanan was awarded the Beck’s Future Price and in 2001 the Creative Scotland Award.

Jeremiah Day, b. 1974 Cape Cod, Massachusetts is an artist currently based in Amsterdam. After having worked and exhibited in LA for numerous years, he became an artist in residence at the Rijksakademie van beeldende kunsten 2003-2004. Recent exhibitions include: ‘Radiodays’, De Appel, Amsterdam, 2005; ‘For Us The Living/Period of Reflection’, Ellen de Bruijne projects, Amsterdam, 2006 and solo in Expodium, Utrecht, 2005.

Krist Gruijthuijsen b. 1980 Geldrop, NL, is an artist and independent curator. He studied fine art at the Art Academy in Maastricht followed by a post-graduate study at the HISK in Antwerp. Since October 2005, he has worked at Platform Garanti as a resident where he developed the ongoing project Archiving Disappearance while also participating in the curatorial course of Konstfack, Stockholm. Gruijthuijsen has organised and participated in national/international exhibitions and projects such as ‘The chess tour’ (solo), Het Domein, Sittard; ‘Peekskill project’, HVCCA, Peekskill, New York and ‘Six perceptions on an archive’, collaboration with INDEX, at K1, Cultural house, Stockholm. He will be an artist-in-residence at Location 1 in New York in 2007.

Runo Lagomarsino, b. 1977, Lund, Sweden. Lives and works in Malmo, Sweden. Lagomarsino has exhibited his work in numerous of group exhibitions and recent solo exhibitions include ‘Extended Arguments’ at Gallery Muu, Helsinki, Finland and a show at Elastic in Malmo. In 2005 he was awarded three grants including the El Basilico residency in Buenos Aires and this year he will participate on the Istanbul Residency Programme at Platform Garanti CAC starting September 2006.

November Paynter, b. 1976, Worcestershire, UK. Lives and works in Istanbul as Curator at Platform Garanti CAC. She was Assistant Curator of the 9th International Istanbul Biennial 2005. She was awarded the Premio Lorenzo Bonaldi per l‘Arte -- EnterPrize for her exhibition ‘Another Zero’ in 2004. Recent independent curatorial projects include ‘Posit9B’, Ikon Gallery, Birmingham, 2005; ‘Encore’ (with Jo Stella Sawicka), Buyuk Londra Hotel and ‘Over and Above’, LA Freewaves, LA, 2004. Paynter regularly writes for Bidoun, ArtReview and Artforum online, is the Istanbul Correspondent for Contemporary and compiles the art section for Time Out, Istanbul.

Ola Pehrson 1964-2006, Stockholm, Sweden. He had recent solo exhibitions in 2005 at Galleri Lars Bohman, Stockholm and in 2003 at Galeria Noua, Bucarest. Hunt for the Unabomber was exhibited in 2005 in the 9th International Istanbul Biennial and in ‘When am I, The Moderna Exhibition 2006’ at the Moderna Museet, Stockholm. Following its presentation at SMBA the work will travel to the Sao Paulo Biennial.