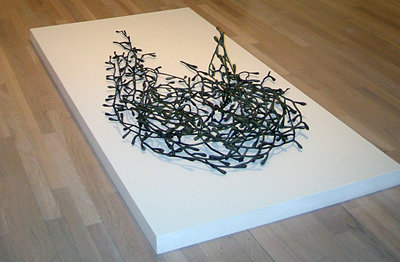 I recall my first mystical vision.
I was in the woods, thinking about Christ.
If He was a carpenter, I wondered what He'd charge for bookshelves?
(Suddenly...)
"Who are you?"
"Death."
"What happens after we die? Is there a hell? Is there a God? Do we live again?
Alright, let me ask one key question: Are there girls?"
-Woody Allen, Love & Death

Blum & Poe is pleased to announce the first solo-exhibition by the artist Matt Johnson. The artist lives and works in Los Angeles. Matt Johnson received his MFA from the University of California, Los Angeles and his BFA from the Maryland Institute College of Art in Baltimore.

Matt Johnson's new sculptures in this exhibition employ eternal materials in the exploration of love, death and enlightenment. Pieta presents a graceful depiction of the dead Christ limply draped in his mother's arms, his fleeting life forever frozen in bronze. 4eva, a massive carved-boulder of 450 million year old pre-Cambrian granite, achieves nothing less than standing as a monument both to everlasting love and time itself. A Picassoid stone skull, Ventifact, has seemingly been eroded into being by the unending ravages of desert winds, like a face caressed to the bone by a smothering lover. These are permanent monuments to the transitory momenti mori for generations not yet born.

In another sculpture, Buddha Crab, the glittering, gilded sea creature, sits poised in a many-legged lotus position atop a molehill of sand like some arachnid prophet at one with the universe, implying that even the lowliest of life-forms can attain nirvana; the image of the Buddha himself miraculously appearing on its shell.

Uncharacteristically for Johnson, a painting will also be exhibited, albeit one that viewers must construct with their eye. Magic Eye, an enormous, elaborately patterned acrylic on canvas seems only to depict so much visual noise until prolonged scrutiny and the proper masonry of the eye begins to make sense of the jumble of information, revealing its hidden melody. It lends new emphasis to the Duchampian contention that only the viewer can complete a work of art.

For information on the exhibition please contact Bridget Carron at the gallery under bridget@blumandpoe.com, tel. 310 836 2062.