If I can Dream 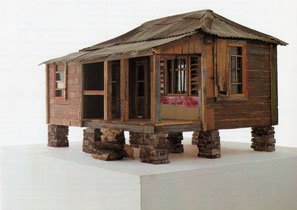 If I can Dream

Yvon Lambert is pleased to announce If I can Dream, an exhibition by Walter Dahn running between September 9 and October 14 2006. For this exhibition, his first at Yvon Lambert Paris, Dahn will present a large group of paintings and sculptures.

At the beginning of the 1970s Walter Dahn studied at the Dusseldorf Art college where significantly he met Joseph Beuys, at that time a professor in Dusseldorf. At the beginning of the 80s he participated in the 7th Documenta and the historic exhibition in Berlin ‘Zeitgeist’. At this time Dahn concentrated essentially on painting and his role in the artists collective ‘Mulheimer Freiheit’ which he co-founded with his friend Jiri Georg Dokoupil.

At the forefront of the Neue Wilden, Dahn’s neo-expressionist paintings with vibrant colours and primitive narrative assured the success of the movement. Dahn began however, in the mid 80s, to follow the tradition of his college professor Beuys - questioning painting as a medium he experimented with other techniques - installation and performance, exploring political subjects.

Today, painting has triumphed as the central medium in Walter Dahn’s work. In many of his paintings from the 90s, made in collaboration with the writer and photographer Philip Pocock, Dahn incorporated text directly onto images; titles or words taken from songs by popstars or groups such as Palace, Pavement, American Music Club, Bob Dylan and Charlie Rich. These works form a parallel with Dahn’s active role in music, namely his participation in concerts and in recordings with the group # 9 Dream in Cologne.

The miniture reconstructions of houses, equally present in the exhibition, are directly inspired by the legendary series of photographs by Walker Evans which document the living conditions of rural America. Around the mid-90s Walter Dahn drew upon these photographs to travel to the US, a voyage that let him through Atlanta, Memphis and Tupelo and their surrounds. From photographs that he took himself he has constructed from a range of different materials - stone, burnt wood, paint and broken branches - these minature houses, which appear simultaneously fictional and documentary.