Charles Gaines and Edgar Arceneaux. Expanding upon film montage and installation, the show connects two distinctive performing arts venues - The Orpheum Theater in Los Angeles and the Brucknerhaus in Linz, Austria - with the 700-mile-long Snake River. 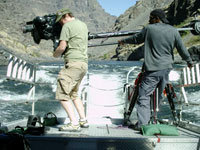 Redcat opens its fourth season with new works by artists Charles Gaines and Edgar Arceneaux. Expanding upon film montage and installation, Snake River connects two distinctive performing arts venues—The Orpheum Theater in Los Angeles and the Brucknerhaus in Linz, Austria—with the 700-mile-long Snake River. The river, which runs from Wyoming to Oregon and Idaho, feeds more than twenty tributary basins across the United States and serves as a literal and metaphoric analogy between geographic or geologic sites and architectural or performative spaces, an interaction of nature and its representation.

For their first collaboration, Gaines and Arceneaux have also enlisted Sean Griffin whose original composition is featured in the video installation. From the Snake River to Linz and back home to Los Angeles, the artists traverse the sensorial and intellectual space that links the physical path of a primordial formation with the sentient abstractions of music. The music becomes a tributary of the architecture and, at the same time, the architecture becomes the instrument of the musical ensemble.

Charles Gaines received a bachelor’s degree from Jersey City State College and a MFA from the Rochester Institute of Technology. Gaines has exhibited widely including the Los Angeles County Museum of Art; Museum of Contemporary Art, Chicago; Kunsthalle Basel; Stadtgalerie, Stuttgart; and the Whitney Museum of American Art, New York. Edgar Arceneaux received his MFA from CalArts and his BFA from Art Center, Pasadena. Arceneaux has exhibited at the Hammer Museum, Los Angeles; Gallery 400, Chicago; The Studio Museum in Harlem, New York; San Francisco Museum of Modern Art; and Kunst Werke, Berlin. Gaines is based in Los Angeles and has taught at CalArts for over fifteen years. Arceneaux was mentored by Gaines when a graduate student at CalArts. The exhibition is REDCAT’s effort to foster the evolution of their ongoing dialogue from student and teacher to that of colleagues.

In conjunction with the exhibition, REDCAT will publish a boxed, two-volume, bilingual (English and German) catalogue with an interview with the artists by Lentos Kunstmuseum director Stella Rollig, and texts by Charles Gaines, Edgar Arceneaux, and REDCAT assistant curator Clara Kim. The catalogue will include installation views of both installations and will be available in November.

Snake River is a collaboration with the Lentos Kunstmuseum Linz and is made possible by the Nimoy Foundation; Elizabeth Firestone Graham Foundation; The Dean's Council Interdisciplinary Arts Grant, CalArts; V. Joy Simmons; The Andy Warhol Foundation for the Visual Arts; the National Endowment for the Arts; and Susanne Vielmetter Los Angeles Projects. Additional support provided by Campari. The Lentos Kunstmuseum presentation and the two-volume publication are funded in part by the EU Commission’s Culture 2000.