For more than 30 years, the artist has focused above all on extending the concept of art, especially in sculpture. Under the title 'Reine und gemischte Zustnde' he show 4 work series starting with the new sculpture ensemble Elf Elf: 11 models of a prototype of the Porsche 911. The second level is more of a classical sculpture room and on the third there is a new site-specific work. 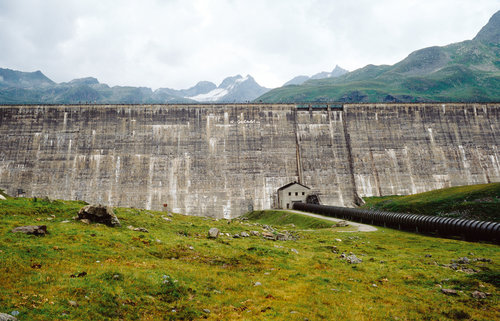 Gottfried Bechtold (born in Bregenz in 1947) is one of the most outstanding artists in Austria. Now, in keeping with its series of large-scale work presentations by international artists, the Kunsthaus Bregenz is dedicating a solo show to his work. For more than 30 years, Gottfried Bechtold has focused above all on extending the concept of art, especially in sculpture. His artistic roots go back to the tradition of the European and American art of the 1960s and 1970s, to the approaches of Joseph Beuys, Wolf Vostell, and Franz Erhard Walther on the one hand and of Walter De Maria, Robert Morris, and above all Robert Smithson on the other.

Departing from sculpture and influenced by postminimalist art, Land Art, and conceptual art, Gottfried Bechtold started out experimenting with different media such as photography, film, and video. In his events, performances, objects, and text works his main concern was always exploring and redefining the corporeal, psychological, physical, social, political, and thus, in the broadest sense, the public and aesthetic borders of artistic activity. Despite the preeminent character of exploration and experimentation in his works, what has always remained important is the issue of sculptural form and its conceptual conclusiveness in relation to real time and real space.

At the same time, he strives always to avoid isolating his artistic practice as a pure model of thought, but instead to expose it to as wide an audience as possible. In this way, he is continuously maintaining the link to reality, to people, to everyday processes, to universally understandable physical laws, and to the decisive factors of his work, to time and space. That means that his events, sculptures, films, objects, and text works are always aimed at the all-important receptive role of the viewer and user.

Among some of his most well-known works are the Interkontinentale Skulptur (1985/87) for the plaza of the Austria Center in Vienna, his series of Reisebilder (1971), his contribution to the documenta 5 100 Tage Anwesenheit in Kassel (1972), Betonporsche (1971 and 2001), Weg Schloss Tirol (2001), and Signatur 02 (2002). Moreover, he has also created countless installations for public space, among them for the University of Constance and the Medienhaus Vorarlberg, a light installation for the administration building of the Vorarlberger Kraftwerke AG, and currently the sculpture Ready-maid for the newly designed square in front of the Festspielhaus Bregenz.

Under the title Reine und gemischte Zustnde Gottfried Bechtold will be showing four work series at the Kunsthaus Bregenz, starting with the new sculpture ensemble Elf Elf (2006) installed on the Kunsthaus Bregenz Plaza as part of the KUB Arena series. Before casting, each of the eleven models of a current prototype of the Porsche 911 series was covered with a snug protective cloth, which adds to the paradox of transforming a high-speed object into a concrete sculpture.

Exactly 35 years ago, on October 10, 1971, Gottfried Bechtold presented his first concrete Porsche at the Galerie Krinzinger in Bregenz as a cast of his own car. This was followed in 2001 by Crash-Porsche, and with this current work, Gottfried Bechtold has finalized his examination of the car as legendary object and the idea of movement. After two years of intense and highly precise effort, he arrives at a kind of monumental closure with which he brings the Porsche project to a definitive halt. This also includes the sculpture on the ground floor. It shows the original Porsche Carrera S 997 prototype that served as the model for casting the first concrete Porsche, in compacted size after having been subjected to a baling press.

The Reisebilder were taken in 1971, and according to the legend that goes along with them they can be traced back to trips to different European countries. They show the artist standing with his Porsche in front of different buildings, which in reality are all in Vorarlberg. Thirty years later in 2001, Gottfried Bechtold repeated this series under different circumstances. This time the photographer of 1971 slipped into the role of the artist: while he and his new version of the sports car once again pose as the main subjects in front of the same buildings, some of which have meanwhile changed drastically, the artist adopts the role of the documentarist. A total of 17 pairs of these so-called Standbilder from 1971 and 2001 make up the work series on the first level.

The second level is more of a classical sculpture room with its presentation of new works from the series Ready-maid Dianas (2005/06). A number of polished and surface-treated naturally occurring Y-shaped branches easily conjure up associations with a woman's lower torso and legs.

The show concludes on the third level with the site-specific work Kalt Warm (2006). It can be classified as one of Bechtold's many sculptures determined by physical laws. The series here has a precursor in the work Ofen in der KAOhltruhe (1973), where an electrical oven regulated the temperature in the freezer to exactly 0' C. The work back then, which was limited to mere conceptual perception, has been expanded here into a work that can actually be experienced and felt by the visitor. Technical measures render two absolutely identical, minimalist steel objects experiencable as extremely warm and cold objects.

Thus what comes full circle here is a large-scale presentation of projects in which Gottfried Bechtold refreshes and finalizes certain core ideas to such a degree that central concepts of his work like time, space, material, and reality become tangible and immediate to the visitor.

The ORF Vorarlberg and the KUB invite you to the Vorarlberger Landestheater for the film matinee screening of Elf Elf followed by a discussion with Gottfried Bechtold and Dr. Walter Fink (cultural program director at ORF). Afterwards, there will be a reception at the Kunsthaus Bregenz. Produced by ORF, the film Elf Elf is a unique documentation of the genesis of Gottfried Bechtold's eleven concrete Porsches “ from the inception of the project to its installation on the KUB Plaza.

The catalogue being published in conjunction with the Gottfried Bechtold exhibition revolves around the extensive one-man show by the Austrian sculptor and concept artist. The work series presented on the KUB Plaza and on the four levels of the Kunsthaus Elf Elf, Standbilder, Physik, and Skulpturen “ show the current state of his examination of an extended concept of sculpture. Short essays by well-known authors from the fields of sociology, physics, and art history introduce each of the four work series; the main essay is by Robert Fleck, Director of the Deichtorhallen Hamburg, a longtime expert on the artist's work. The graphic design by Walter Nikkels harmoniously reflects Bechtold's conceptual view of art.

Standbilder (1971/2001), 2006 Black and white photograph on baryta paper in a cardboard folder (this edition comprises 17 different motifs with 3 prints of each) Limited edition of 51 pieces, numbered and signed

White cast porcellin in a cardboard box plus black and white photograph on baryta paper depicting a production-site motif Limited edition of 51 pieces, numbered and monogrammed Size: 24 A— 7,5 A— 10 cm Special price during the exhibition: 880 a‚-, price after the exhibition: 950 a‚-, incl. 10% VAT, plus forwarding expenses Publisher: Kunsthaus Bregenz