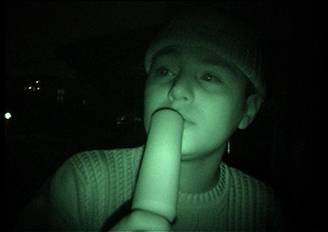 Nevin Aladag
In Voice Over Nevin Aladag directs her gaze once again towards Turkish born teenagers in Germany, drawing on their example she traces an intricate path towards a contemporary cultural discernment. This most recent film consists of three separate parts: a sort of prologue, and two equally balanced roles that alternate repeatedly. The fourteen minute video begins with a car journey: an anonymous hand holds a mouth organ out of the moving car’s window, one hears the sound made by the instrument with the passing air.
Then follow recordings of German - Turkish youth, who sing Turkish folk songs in the irregular setting of a night shot. Cut: rain pattering on a drum kit.
For Voice Over Aladag has done without technical effects throughout: the changes are minimal and are solely intended to direct the attentiveness of the spectator to the almost meditative mood. The sequences with the drums are formed like a still life, the recording of the singers focus on facial expression, to the almost total exclusion of the background. In both instances a metaphoric and parallel process is revealed: like musical instruments adolescents are set in vibration by natural influences.

Ingo Gerken
Ingo Gerken’s work generally ranges between the interfaces of dematerialization and site-specific reification. It activates art historical contexts and transforms them into spatial-sculptural combinations. Through the area of conflict between relevance, situation and subversion, Gerken scrutinizes the permeability of imaginary and real spaces: their construction, flexibility and weight.
Cityworks is a series of photographs, which have been created by direct intervention with the picture. These perspective steps, drawn from the urban surroundings and existing structures, momentarily converge then ambiguously melt into each other.
A subversive new space is opened (within the artists reach) where the photographic and urban surface appear perforated. By logging into the perspective space Gerken touches a variety of borders between the model-like and the monumental, action and sculpture, photography and painting, the every day and the history of art, private view and public space. The artistic process is itself documented as a fleeting and fragile construct, that exists for a brief moment, yet can be proportionally shifted.