Mel Bochner was one of the first artists in the 1960s to introduce language into the visual field. Charles Sheeler (1883-1965) is recognized as one of the founders of American modernism and one of the master photographers of the twentieth century. Photographs by the Score: Personal Visions Twenty-Some Years Apart. 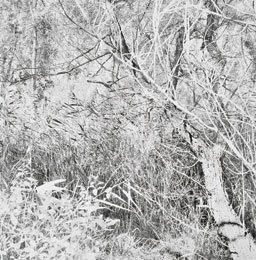 Overview: A leading practitioner of conceptual art, Mel Bochner was one of the first artists in the 1960s to introduce language into the visual field. These efforts, however, remain surprisingly undocumented. Focus: Mel Bochner—Language 1966-2006 brings together for the first time more than 50 works on paper, paintings, sculptures, photographs, and installations to present an overview of the artist’s languagebased works.

Highlights include the rarely seen landmark Working drawings and other visible things on paper not necessarily meant to be viewed as art (1966), which art historian Benjamin Buchloh has called “the first conceptual art installation." Also featured are a number of early “word portraits"—pen- and-ink drawings that incorporate words culled from a thesaurus and used to describe artists such as Dan Flavin and Eva Hesse and their work—and recent multicolored canvases with texts drawn from the writings of philosopher Ludwig Wittgenstein and Roget’s Thesaurus.

Coinciding with the Art Institute exhibition, The Joys of Yiddish (2006) has been commissioned by the Spertus Museum on Michigan Avenue as the final installment of Language Barrier—a series of site-specific artworks on the 50-foot barricade of the construction site for the new Spertus Institute of Jewish Studies facility.

Catalogue: The accompanying catalogue and academic symposium are generously funded by the Community Associates of the Art Institute of Chicago, Lannan Foundation, and Nathan and Suzanne Cohen Foundation, Inc.

Sponsor: This exhibition is made possible by a gift from Judith Racht and Irving Stenn, Jr., with additional funding and support provided by Judith Neisser. Ongoing support for focus exhibitions is provided by The Alfred L. McDougal and Nancy Lauter McDougal Fund for Contemporary Art.

Charles Sheeler (1883-1965) is recognized as one of the founders of American modernism and one of the master photographers of the twentieth century. His work is synonymous with precisionism, a crisp, clean, hard-edged style that reconciled cubist abstraction and the machine aesthetic of Marcel Duchamp with American subject matter. Trained in industrial drawing, decorative painting, and applied art at the School of Industrial Art in Philadelphia, and having studied at the Pennsylvania Academy of Fine Arts, Sheeler fully absorbed the lessons of each discipline and forged his own singular approach.

Equally gifted as a photographer and painter, Sheeler analyzed the relationships between photography and traditional artistic methods such as painting and drawing with more rigor and intellectual discipline than perhaps any other American artist of his generation. Like a well-conceived scientific experiment, his practice of using fully realized photographs explicitly as the basis for paintings and drawings led to results that crystallized both the differences and similarities between them. The brilliance and scope of Sheeler’s approach is evident in the way his works in one medium often manage to function as autonomous objects while being inextricably linked to works in other media.

Charles Sheeler: Across Media is the first exhibition to focus upon the complex, often paradoxical relationships between photography, film, drawing, and painting that were central to Sheeler’s art. A celebration of the formal clarity and beauty of the artist’s works, this exhibition draws upon a core of 50 masterpieces, including the magnificent painting Classic Landscape (1931), masterful drawings such as New York (1920) and Counterpoint (1949), and striking examples of the artist’s photographs. The works in this exhibition display Sheeler’s fascination with the visual effects of various media, evident not only in his photographs but also in his works created after them in other media.

Photographs by the Score

Overview: This revealing exhibition examines 150 examples of artistic progression and comparison and includes work by 45 photographers. By comparing works 20 years apart, one can find those master photographers not only using similar subjects, approaches, and formal arrangements but also refining their perceptions as well as their ability to make use of a greater wealth of life experiences.

Photographers who improve and remain inventive and creative decade after decade are a welcome phenomenon in a ﬁeld known too often for its hot streaks and short careers. The poet W. H. Auden made an insightful observation about long-tenured poets that also may apply to photographers. He noted that when young poets are ﬁrst successful in writing, they often hope it will happen again and again. When two decades have passed, however, they realize that they never want to repeat the individual success of any single poem. Auden felt that one’s self did not change, but the individual’s worth and depth were discovered over time, making a work created later in an artist’s career necessarily different from an earlier expression of the same idea. This revealing exhibition examines 150 examples of artistic progression and comparison and includes work by 45 photographers including Ansel Adams, Euge'ne Atget, Bill Brandy, Harry Callahan, Henri Cartier-Bresson, Imogen Cunningham, Walker Evans, Andre' Kerte'sz, Eliot Porter, Alfred Stieglitz, Paul Strand, Edward Weston, and Minor White. Examples by living photographers include works by Dawoud Bey, William Clift, Gregory Conniff, Roy DeCarava, Terry Evans, Steven Foster, Lee Friedlander, Kenneth Josephson, Ray K. Metzker, Joel Meyerowitz, Joel Sternfeld, Bob Thall, and others.