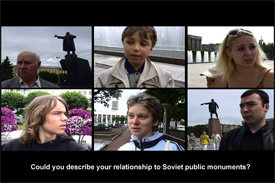 10 Defining Experiments is the culmination of the inaugural 2006 Grants Program. The selected artists are creating new, unique projects specifically for this exhibition in diverse media: photography, painting, video, performance and installation. The subjects and issues addressed by the artists are varied and range from a formal discussion on the nature of the still life in painting, to poignant statements about violence in Latin America, to investigations on the nature of language, knowledge and history. A shared element found in the projects is an experimental, investigative, praxis: a discursive process whereby each artist attempts to arrive at definitions to question, but not necessarily to fully answer, complex layers of meaning found in everyday life.

One of cifo’s initiatives is its’ Grants and Commissions Programs that offer opportunities for contemporary artists from Latin America to develop new work. Currently, there are two programs in place: the Grants Program targeted at emerging artists and the Commissions Program geared at mid-career artists. “Both programs are committed to broadening the global understanding of work by contemporary artists from Latin America and moving beyond the traditional paradigms and stereotypes associated with art from Latin America," explained cifo’s Director Cecilia Fajardo-Hill. Through its Grants and Commissions Programs, cifohas set forth the goals of assisting artists produce work that may lie outside commercial viability and providing artists with a unique platform to present projects that engage local and international audiences alike.

cifo, the Cisneros Fontanals Art Foundation, is a non-profit organization, established in 2002 by Ella Fontanals-Cisneros and her family to foster cultural and educational exchange within the visual arts. cifohas three primary initiatives: cifo Art Space - a permanent venue for the presentation of engaging and provocative contemporary art exhibitions highlighting works from the Ella Fontanals-Cisneros Collection, works by it’s grantees and commissioned artists and experimental, challenging art programs; the Grants and Commissions Programs supporting emerging and mid-career contemporary multi-disciplinary artists from Latin America; and offering support to other cultural endeavors including Miami Art Central.

Emilia Azcarate creates a large-scale sculptural installation by weaving and interconnecting black hairpins. In this piece, a mundane object—a black hairpin—is transformed, alluding to circular structures such as mandalas and women’s hair, both subjects which fascinate the artist. Seen from up close, the sculpture (Untitled) possesses a delicate quality. When beheld from a distance the piece achieves the opposite effect, becoming imposing and fence-like.

Alessandro Balteo’s UNstabile-Mobile interconnects the histories of art, power, and politics in an installation that comprises a visual component of texts and images appropriated from varied sources, and the construction of a sculptural piece. Balteo translates the organic formation of oilfields by constructing an unstable sculpture. The sculpture, influenced by the work of Alexander Calder, becomes a visual metaphor for the instability of the region.

In the project, Estas Ruinas que ves, Mariana Castillo Deball examines Mexico’s complex relationship with its past through her documentary investigation of contemporary archeological practices. Estas Ruinas que ves examines the context of archaeology and the life of archeological artifacts, exploring how they are presented and animated in varied contexts, and how they are interpreted and defined. Her installation consists of three components: an archive displaying her photography, a museum setting devoid of objects, and a publication that ties all these elements together.

Regina Jose Galindo’s Plomo (Clases para aprender a manejar armas) is a performance, documented by video, of the artist receiving intensive, professional arms training, Plomo addresses the rampant violence and constant sense of fear prevalent in the daily lives of Latin Americans. The word Plomo translates into English as “lead," but it is also short for an urban idiomatic phrase echar un plomo, meaning “to pop a cap," or, in other words, “to shoot."

Josefina Guilisasti’s project Fragmento II consists of eight paintings installed at the viewer’s eye level, each depicting a fragment of a classic still life transposed from its pictorial context and made the protagonist—the single element—of a composition on canvas. Fragmento II is a continuation of Guilisasti’s investigation into the genre of still life painting and how, in her opinion, mundane objects have been relegated to a mere supporting role and are forgotten in the history of art.

Ruben Gutierrez’s project Skeptical Definitions (Nasca phase) consists of “hybrid" documentation (video, drawings, and Web-based art) of Nazca and its outlying areas. Gutierrez conducts an investigation to determine a location for a future land intervention in the suburbs of Lima. With this project, the artist provides the spectator with various readings on Perú’s contemporary reality, and consequently Latin America, through multiple references and skeptical definitions.

Jacqueline Lacasa interprets the formation and structure of knowledge and how it relates to artistic production. The Triptico de Alejandria (Triptych of Alexandria), as an installation, becomes a space—a metaphorical representation of the library of Alexandria based on the teachings of Torres-Garcia, a legendary Uruguayan artist and theorist. This triptych comprises a palimpsest (works by Torres-Garcia, altered by the artist), a library setting, and a video documentation of her visit to the current library of Alexandria.

Rubens Mano’s work addresses the urban-metropolis landscape and the rapid changes to which it is subjected, depicting a sense of instability and impermanence. In Untitled (From the Series Súbitas paisagens), he chooses to reflect on an area near the outskirts of Sao Paulo. The edifices photographed exist in a space—which the artist describes as an “interval"—left to decay, a disappearance from the landscape different from the one to which edifices are subjected in the metropolis.

Carlos Motta rediscovers a city that finds itself constantly in flux and the subject of musings and mixed interpretations. Leningrad, Petrograd, Petersburg consists of a video and photographic installation that presents three distinct journeys across St. Petersburg. The first follows a historical avenue as Motta revisits sites highlighted in a revolutionary publication 52 years ago. The second pursues a sociological avenue with a video piece where the artist interviews inhabitants of the city about their relationships with public monuments. The final journey takes a personal perspective through a video montage, with readings of two important Soviet poems.

Consisting of two separate publications: one in English and the other in Spanish, Translated Catalogue and / y Catalogo traducido examines the intricacies of art and the subject of translation. The artist Carla Zaccagnini creates publications that are works of art in-and-of themselves—blurring the line between visual arts and literature—as they contain images of artwork and essays relating to the images themselves. These catalogues are distributed to the audience in order to establish a more intimate, prolonged experience with the work.