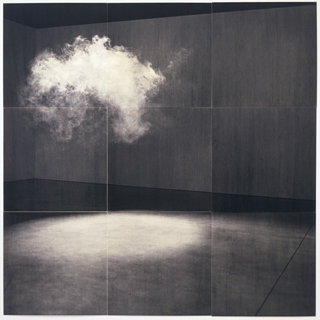 Lorna Simpson, a comprehensive survey of the multi-faceted work of one of the leading artists working in the United States today, will be on view at the Miami Art Museum from October 5, 2006 until February 4, 2007. The exhibition is organized by the American Federation of Arts (AFA) and curated by AFA Adjunct Curator Helaine Posner.

The exhibition includes approximately fifteen of the artist’s acclaimed image and text pieces (1985-92) and seven major photographs on felt (1994-2005). Also on view are six film installations dating from 1997 to 2004, including Call Waiting; Easy to Remember; Interior/Exterior; Full/Empty, a seven-part projection and related series of photographs; 31, a video calendar in which the artist closely observes a month in the public and private life of an unknown woman; and Corridor (2003), a work that juxtaposes the domestic meanderings of two women—one set in the seventeenth-century Coffin House and the other in the 1938 house built by Bauhaus architect/designer Walter Gropius for his family in Lincoln, Massachusetts. The exhibition concludes with Simpson’s recent photographs, which consist of ghostly, silhouetted profiles of black women and men accompanied by the titles of paintings, songs, and films that date from the 1790s to the 1970s.

Lorna Simpson first became well known in the mid-1980s for her large-scale photograph and text works that confront and challenge conventional views of gender, identity, culture, history, and memory. In the mid-1990s, she began creating large multi-panel photographs printed on felt that depict the sites of public—yet unseen—sexual encounters. More recently, she has turned to moving images. In film and video works such as Call Waiting, Simpson presents individuals engaged in intimate and enigmatic yet elliptical conversations that elude easy interpretation but seem to address the mysteries of both identity and desire.

About the Artist
Lorna Simpson was born in 1960 in Brooklyn, New York, and received her BFA in Photography from the School of Visual Arts, New York, and her MFA from the University of California, San Diego. Her work has been exhibited at the Museum of Modern Art, New York (1990), the Museum of Contemporary Art, Chicago (1992), the Miami Art Museum (1997), the Walker Art Center, Minneapolis (1999), and the Irish Museum of Modern Art, Dublin (2003). She has participated in such important international exhibitions as the Hugo Boss Prize (1998) at the Guggenheim Museum, New York, and Documenta XI (2002) in Kassel, Germany. Simpson has been the subject of numerous articles, catalogue essays, and a monograph published by Phaidon Press.

Tour
Lorna Simpson debuted in April at the Museum of Contemporary Art, Los Angeles. After the presentation in Miami, the exhibition will travel to the Whitney Museum of American Art (March 1-May 6, 2007); the Kalamazoo Institute of Arts, Kalamazoo, Michigan (May 25-August 19, 2007); and the Gibbes Museum of Art, Charleston, South Carolina (September 7-December 2, 2007).

Catalogue
A fully illustrated catalogue published by Abrams, New York, in association with the American Federation of Arts accompanies the exhibition. The book includes a curatorial foreword by Helaine Posner; a dialogue including Lorna Simpson, artist Isaac Julien, and Studio Museum in Harlem Director Thelma Golden, with a preface by Shamim M. Momin, Associate Curator at the Whitney Museum of American Art; an overview of Simpson’s work, from the earlier image and text work to the recent films, by Okwui Enwezor, Dean of Academic Affairs at the San Francisco Art Institute; and an essay exploring the relationship of Simpson’s work to cinema by cultural critic and New Yorker staff writer Hilton Als.

The AFA is a nonprofit institution that organizes art exhibitions for presentation in museums around the world, publishes exhibition catalogues, and develops education programs. For more information on the AFA, please visit http://www.afaweb.org