2006 Problems. The show comprises a number of new large-scale paintings and painted ceramic works. The artist will turn the project space of the gallery into a fictional factory, painted floor to ceiling in his signature 'hazard' yellow - recalling a recent exhibition at Aarhus Kunstmuseum where he created an environment in homage to a bank. 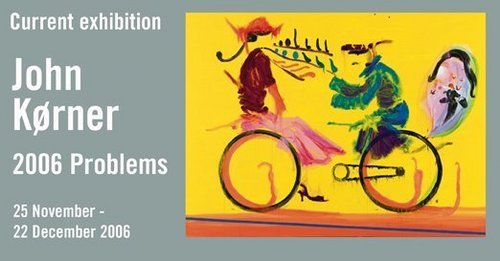 Victoria Miro Gallery presents the first solo exhibition in the UK of the Danish artist John Korner. 2006 Problems comprises a number of new large-scale paintings and painted ceramic works. The artist will turn the project space of the gallery into a fictional factory, painted floor to ceiling in his signature 'hazard' yellow - recalling a recent exhibition at ARoS Aarhus Kunstmuseum, Denmark where he created an environment in homage to a bank.

There are plenty of known knowns in what John Korner has recently painted: ships and trees, men and women, crocodiles and birds, town and country-and most apparently in 2006 Problems, factories and bicycles. These are modern things that we know we know. And as this commandeered logic continues, we know there are some things we do not know (known unknowns), and still others we don't yet know we don't know (unknown unknowns). It's the known unknown phenomena that belong to the realm of Korner's sustained symptomatology of problems. Visible in paint as coloured blot marks shaped like elongated eggs or dropped-in droppings, problems often line up in Korner's works as if notes on a musical stave or blobs of clay on wobbly shelves, latent undifferentiated tissue that's waiting to become more specific. Of course how to paint a problem must have been in itself a problem. We may presently be dealing with the problems of this year, or equally, it could be that there is a host of two thousand and six of these quandaries. Korner makes paintings and painted ceramics, while, as he insists, he is not really a 'proper' painter. His often vast canvases are foremost a way of communicating through a very direct means and are only paintings later, almost by coincidence. All of this is, needless to say, problematic.

There is a spirit of frank lucidity to Korner's enterprise (where even things that are problematic try their best to be clearly visible) that resists unnecessary obscurantism or any notion that the paintings or the artist somehow have access to privileged information. What do they think? What do you think? What is the chap on the bicycle thinking? What's the problem? In 2006 Problems, problems emanate from the space in between the two workers having a picnic and jamming on their instruments in Music and Problems. Problems are conceits that sprout like errant thought bubbles, or populate buildings, the known and the unknown coexisting. In Conversation a couple discuss their problems while riding a bike; not least, it would seem, the problem of how not to fall off it.

The factory is a big problem. The factories in Korner's settings are both monstrous behemoths and reassuring, exemplary architectural stalwarts. Employing and providing, and defining leisure-time landscapes via negativa, the factories are necessarily problematic but always unwaveringly modern. They are of course not today's brightly coloured metal boxes of enterprise estates, but upright factories belonging to the town, proudly sporting smoking chimneys like beached ocean liners. Korner's realm of modern problems is frequented by many such introductions to the badges of civilisation. The schools, the post offices, job centres, museums, hotels and banks which riddle the paintings each occur as indicative services for a developed society. The factory, representing the fundamentals of a manufacturing economy, feeds them all. Akin to the historical fashion in many aspirational European societies for parsing the services, trades and characters of everyday life into painted ceramic tiles-showing the weaver weaving, the miller milling, the baker baking, for example-Korner's painted scenes reflect on the constitution of societies defined by work, as well as the cultural history of industry, with a supplementary psychology of problems.

Edited extract taken from the catalogue essay 2006 Problems: John Korner by Max Andrews. Max Andrews is a writer and curator. He is co-founder of Latitudes, Barcelona. Available from the Victoria Miro Gallery. Price £TBC.

John Korner was born in Arhus, Denmark in 1967. He studied at the Royal Danish Academy of Fine Arts Copenhagen between 1992 and 1998. John Korner is the founder of a group of artists called 'Korner's office' that also includes Kirstine Roepstorff, Tal R and Kaspar Bonne'n. Korner has had solo exhibitions at ARoS Arhus Kunstmuseum, Denmark, Art Basel, Switzerland, Moderna Museet, Sweden and Galleri Christina Wilson, Copenhagen and his work was included in the exhibition Momentum in Moss, Norway, 2004. His work is represented in the collections of the ARoS Arhus Kunstmuseum, Royal Museum of Fine Arts and Herning Museum of Art all in Denmark, the Saatchi Collection, London and the Rubell Family Collection, USA.

Korner's work was first shown at Victoria Miro Gallery in 2004 in a group exhibition, Painting 2004.