Nineteen emerging and established artists working in the East of England. Selected by artist David Ward and film-maker Jayne Parker, the work in the exhibition ranges from painting and photography to film, sound and installation. 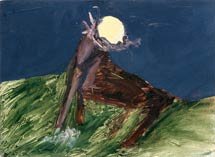 From paintings to installations. Works of 19 artists

The Kettle's Yard Open exhibition is back this year with nineteen of the most exciting emerging and established artists working in the East of England. Selected by artist David Ward and artist film-maker Jayne Parker, the work in the exhibition ranges from painting and photography to film, sound and installation. The Open presents visitors with the opportunity to see and enjoy recent work by each of the artists that is variously thought provoking, contemplative, upbeat, and sometimes surprising.

TNWK (Kirstin Lavers and Cris Cheek) worked with Coleridge Community College in Cambridge to record Coleridge's Rime of the Ancient Mariner.' Each of the pupils, teachers and support staff at the school participated in the work by speaking a different line, to create a sonic portrait of the school community. Paintings in the show include those by Amanda Ansell, whose fictitious islands in abstract seascapes are inspired by bathing rituals and long periods of time spent contemplating bath foam. The landscape theme is taken up by Deborah Sedgwick's aerial views and Julia Ball's light filled abstractions from the Norfolk coast. Anna Ilsley's emotional landscapes explore the three worlds of man, beast and nature.

Jo Chapman will create a wall drawing for Kettle's Yard of intertwined flowers, plants and other objects found in horticultural illustrations and her daily walks. Journeys are the inspiration for Joan Murray's drawings, which incorporate images from maps, as well as tracings of her own walks.

The moving image is a strong component of this year's show. An ant runs obsessively round the rim of Terry Bond's short movie ŒEquator,' while Ginny Reed fills the screen with an inflating balloon before all is revealed with the inevitable bang. Neil Henderson's reversed film of a developing Polaroid, plays on its process to produce a Turneresque seascape under a setting sun, exploring how time is represented in film and photography. David Gates's atmospheric film of a row of seaside houses in Jaywick, Essex, is an animation of pinhole photographs taken with his handbuilt camera and hand coated glass plates. Anton Lukoszevieze is a cellist renowned for his experimental music. In his film work, a tree in his garden and overhead electricity cables are treated as a musical score.